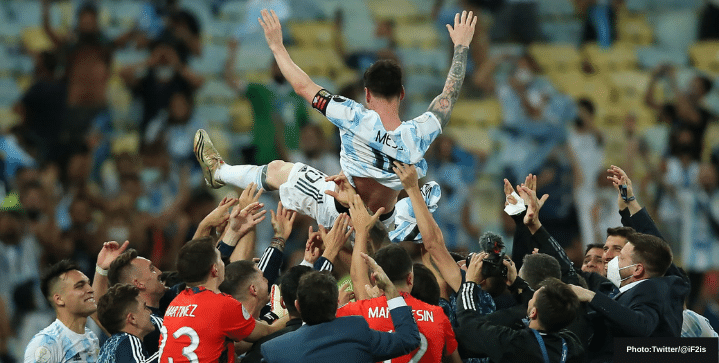 The cat is out of the bag.

According to Portuguese television station RTP Desporto, Lionel Messi has been tipped to win the Ballon d’Or, a record-setting 7th. Francesc Aguilar, who broke the news of Messi’s eventual Ballon d’Or in 2019, reconfirmed this year’s winner.

France Football told the 34-year-old Argentine superstar of the pending award earlier this week. Messi has purportedly recorded an exclusive interview with the French magazine.

Argentina remain unbeaten in 26 games — the last time they lost a game was July 2019 — and qualify for the 2022 World Cup should they defeat Brazil in World Cup qualifying tonight. Brazil has already qualified.

Despite the reports out of Portugal, Robert Lewandowski is still the odds on favorite to be awarded his first. The Polish striker won the 2021 European golden boot and helped Bayern Munich to yet another Bundesliga title.

Lewandowski is also the first player to score 60-plus goals in a calendar year since Ronaldo did it in 2014, the same year the Portuguese star won the Ballon d’Or.

Former Barcelona midfielder and 1960 Ballon d’Or winner Luis Suarez thinks Lewy deserves it again this season. “Give Lewandowski the Ballon d’or! If you don’t, then I am giving him mine!” Lewandowski cruelly missed out as a favorite for last year’s canceled award.

The annual Ballon d’Or award ceremony takes place on November 29 at the Théâtre du Châtelet in Paris. French President Emmanuel Macron is also expected to be there.