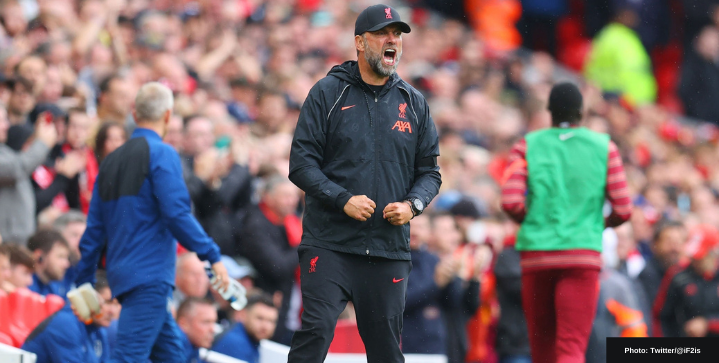 Jurgen Klopp is on the shortlist to replace under-fire boss Ronald Koeman at Barcelona, according to El Nacional. Koeman’s side suffered another humiliating 3-0 loss to Benfica in this week’s Champions League. The Dutchman has managed only two wins so far this term.

Liverpool’s Klopp is one of five top candidates to take over at Camp Nou, a list that includes Xavi, Erik ten Hag, Roberto Martinez, and Andrea Pirlo.

Barcelona president Joan Laporta is a big fan of the German and Thomas Tuchel, who is hot off the heels of Champions League glory. Both coaches have contracts that run into 2024, but Tuchel has yet to coach one entire season at Chelsea. Klopp is in his 6th campaign with the Reds and deemed more attainable.

Of course, convincing Klopp to leave his beloved and top-of-the-table Liverpool and settle a €36m buyout clause this early in the season seems far-fetched. And Klopp, who knows how to get the best out of his players, won’t fancy joining a massively in debt and chaotic club.

Remarked Klopp after Messi’s exit from Barcelona back in August. “There’s no big difference. They also wear red and blue. Seriously, It’s hard to imagine, really. But Barcelona are paying the consequences of their economic decisions they made in the past.”

However, Barcelona could be planting the seed for future negotiations after this season ends. The Catalan club could hire a temporary coach to finish out this term.

Do you see Klopp joining Barcelona in the future? Let us know on Facebook.