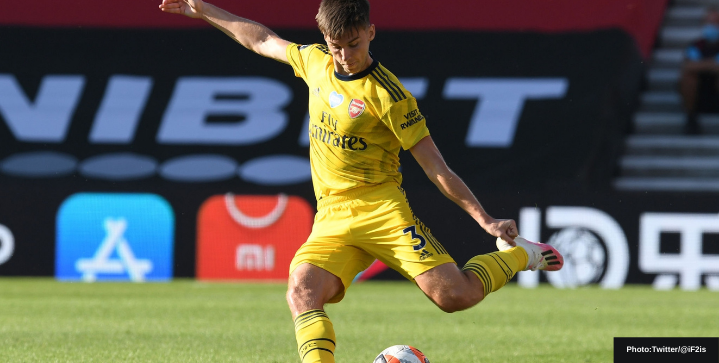 Arsenal have confirmed that Kieran Tierney is set to miss 4-6 weeks following his injury against Liverpool.

The Scot suffered ligament damage in Arsenal’s 3-0 defeat to the Reds last weekend.

The injury comes at a crucial time for the Gunners, who face Slavia Praha in the first leg of the Europa League quarter-final tomorrow.

Currently sitting 10th in the Premier League table, winning Europa League is only the way Arsenal can assure Champions League next season.

Tierney’s absence a huge blow for the Gunners

No Arsenal player has created more chances in the Premier League this season than Kieran Tierney (29).

The Scot’s absence means that the ever-versatile Bukayo Saka, who just returned from a hamstring strain, will feature in the left-back position.

Arteta was skeptical when asked if Tierney could feature agains this season, saying “I don’t know. We’ll have to go day by day and see how the knee is reacting.”

“The timeframe will be that (up to six weeks). It could have been worse because the action looks quite scary, but he looks a bit better and the damage was not that bad, so at the end of the day it is not the bad news we could have been waiting for.

“We are going to have to go day by day and see how Kieran is feeling, then when he gets close to playing time and how he is feeling we will make that decision.”

The Spanish boss shared similar caution to Tierney’s participation at the Euros. “Again it will depend how things evolve in the next few weeks. He’s so keen to play for us before the end of the season,” said Arteta.

Real Madrid loanee Martin Odegaard is also a doubt for Thursday with an ankle problem picked up during the international break. In addition to Saka, Arsenal expect Smith Rowe and Xhaka to be available for Thursday at the Emirates.