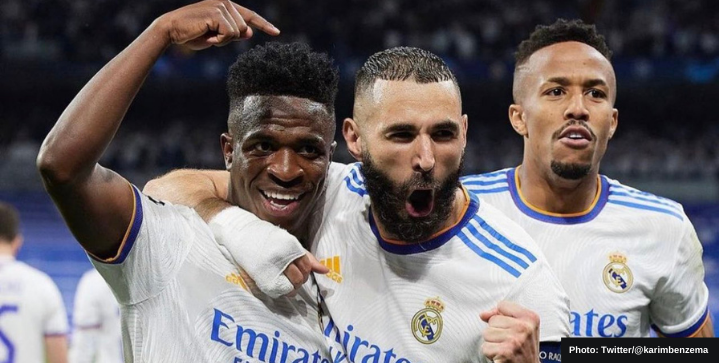 What a year Karim Benzema is having.

The French striker is in sublime form, having averaged a goal per game this 2021/22 season. His heroic efforts — back-to-back hat-tricks against PSG and Chelsea in the Champions League knockout stage— have also catapulted Real Madrid to the Champions League final, where they will meet Liverpool again. There’s a reason King Karim is a leading candidate for this year’s Ballon d’Or.

After working hard all game, King Karim’s goal finally came upon a deft pass from teammate Ferland Mendy to tee it up. Benzema receives the ball at the edge of the area and curls it beautifully into the top left-hander corner, dipping below the goalkeeper’s grasp.

All seemed to favor PSG in the round of 16, with frontman Kylian Mbappe excelling in goal-scoring form against Los Blancos. But King Karim had different plans.

Down 2-nil going into the second half of leg 2, Benzema stepped up by scoring a sensational hat trick in 17 minutes to give Real Madrid the 3-2 aggregate victory.

The first goal came down to the 34-year-old’s grittiness. Benzema pressured Donnaruma into making an errant pass that landed at Vini Jr’s feet. The Brazilian assisted Benzema’s first goal, with the No.9 now teething to score the equalizer.

Madrid’s midfield magician Luka Modric then squared up Benzema for his second goal.

But it was Benzema’s third goal and winner that typified his team’s never-die attitude on the day. Madrid capitalized on PSG’s poor kickoff to snatch the game-winner, with Benzema slotting in a simple, no-nonsense one-time finish off the laces.

If you thought Benzema was done showing ruthlessness against PSG, guess again. Benzema followed up his hat-trick by scoring yet another in the first leg against Chelsea in the Champions League semi-finals.

His first two goals were exquisite headers. Vini Jr. played the provider again, crossing the ball into Benzema, who cut inside. But the craftiness of Benzema’s adjustment and strong neck muscles pummel it past Edouard Mendy.

If his first header required pace, the second header required careful control and craftiness. Benzema snaps his head back to receive a Modric lob and delicately redirects the ball into the net.

But Benzema’s third goal might be his best, mainly because it’s the result of pure hustle. He ran from his box down the field, taking on the possibility of a Mendy mistake. And it paid off. Mendy’s weak square pass ended in the feet of Benzema, who, like a locomotive, ran through Rudiger to get the ball and knock it into the empty net.

Tied 4-4 on aggregate in extra-time of the second leg, Benzema’s head came up BIG again.

Minutes before the crucial goal, Benzema could be seen advising Vini Jr. on tactics. The young Brazilian heeded the coaching of his veteran teammate, finding Benzema in time for the tidy header. Real Madrid, once down and out, were once again moving on.

Never give up. Despite the hot start from Manchester City, Real Madrid gradually made their way back into the game. Benzema got one back in the 37th minute, volleying one in from Mendy on his left side.

Down 4-2 at the Etihad, Benzema dinked in a Panenka at the penalty spot. Calm and cool on the biggest stage — even the City fans gave him a standing ovation.

“I’d been trying it for a long time and I was waiting for the right moment, in a match like this with a lot of pressure. In this way, the pressure is gone,” said Benzema on the panenka.

City won the match 4-3, but Benzema’s brace gave Madrid a lifeline in their return to the Santiago Bernabéu.

It may not have been his best game, but it didn’t matter. After Rodrygo led the comeback, scoring a remarkable two goals in stoppage time, Benzema scored the go-ahead goal that gave Madrid the 6-5 aggregate victory over Manchester City.

The road to Ballon d’Or continues on May 28th in the Champions League final against Liverpool. What will Benzema do next?