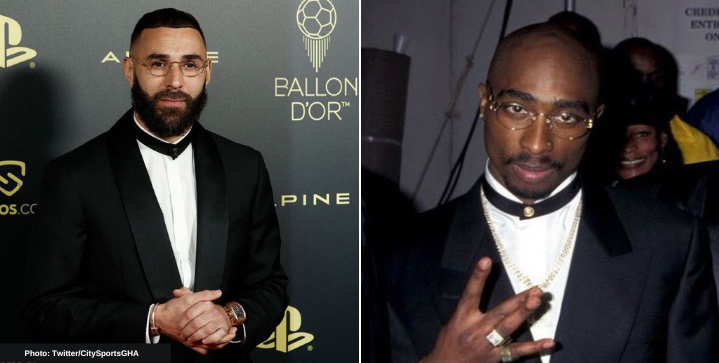 Karim Benzema won his first-ever Ballon d’Or award tonight in Paris, and the French striker did it in style.

The 34-year-old Benzema channeled his inner Tupac Shakur look, wearing the same suit style as the American rapper who’s inspired the Frenchman since he was 15.

Benzema’s Gala look at the Châtelet Theater in Paris included a white shirt and black suit, topped off with a black ribbon and gold glasses around his neck — the same attire Tupac wore at the 23rd Annual American Music Awards in 1996.

The only missing item from Benzema-Tupac’s wardrobe was the gold chain.

Karim Benzema becomes the first French player in the 21st century to win the Ballon d’Or. Zinedine Zidane won it in 1998.

Zizou, who coached Benzema for four trophy-laden seasons at Real Madrid, presented the trophy to Benzema at this year’s ceremony.

“This is a childhood dream. My journey was not easy. It was difficult for me and my family. To be here today for the first time, I am happy with my work. I will keep going,” said Benzema in his acceptance speech.

Benzema is the oldest Ballon d’Or winner in 66 years, proving “that age is just a number.”

The Madrid striker succeeds Lionel Messi in winning his first-ever Ballon d’Or for his incredible performances in last year’s triumphant Champions League and La Liga winning seasons. For the first time in 16 years, neither Ronaldo nor Messi made the Ballon d’Or top three.

The stars of world football were out in force on the red carpet in Paris, but only one brought the drip and deserved the award: King Kareem.

On top of all this, Benzema expects to sign a new one-year with Los Blancos that’ll keep him in Madrid until 2024.