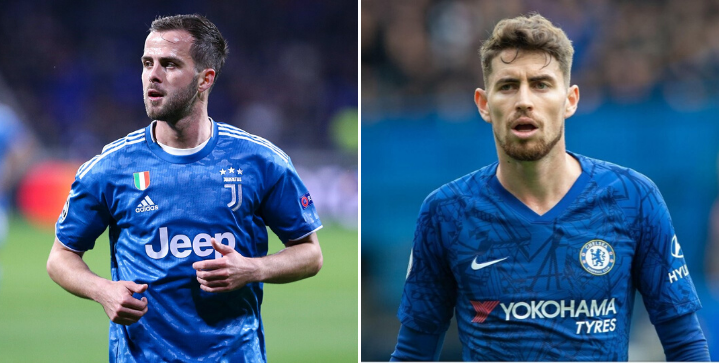 Juve boss Maurizio Sarri is set on bringing his former Chelsea and Napoli midfielder to Turin. Sarri made Jorginho his first signing (£57m) at Chelsea during the 2018/19 season before The Blues sacked the Italian boss.

While Jorginho may have struggled in his first Premier League season, the vice-captain has emerged to become a fan favorite this season.

Technically strong, the Italy international has scored nine goals in 91 appearances for the Blues.

Jorginho is also fond of working with Lampard whom he’s attributed to boosting the player’s confidence this season.

“This has a lot to do with Lampard, thanks to the importance he has within the club. And the way he spoke about me as a person and as a player at the beginning of the season. Then the opinions of me started to change,” said Jorginho.

The Italian has three years remaining on his Chelsea contract, “but if a big enough offer comes in then a deal could go through,” confirmed Jorginho’s agent, Jorge Santos.

Despite Jorginho’s improvement and £60m price tag, Chelsea boss Frank Lampard is still open to offloading the player in a swap deal for Miralem Pjanic. The financial constraints caused by the coronavirus pandemic have forced clubs to examine ways to negotiate deals.

The 30-year-old Bosnian midfielder might be considered superior to Jorginho across all facets including the short pass, long ball, marking, set pieces, and positioning, he’s also two years older.

While Sarri would reunite with Jorginho for the third time, it’s still unclear how Pjanic may present a massive upgrade for Chelsea.

PSG made a formal offer for Pjanic as well.

Should the Jorginho-Pjanic swap deal go through, which team is getting the better deal? Let us know what you think on Facebook.