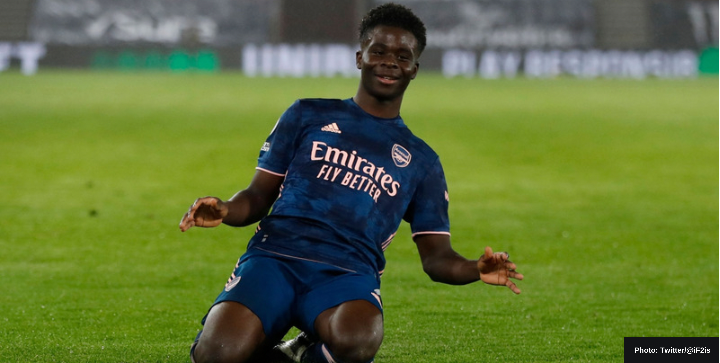 Juventus and Atletico Madrid are keeping tabs on Bukayo Saka, according to Calcio Mercato.

The 20-year-old Arsenal winger is currently valued by the London club at €50 million, at least.

This season, Saka has played all five Premier League matches with the Gunners but has to get on the scoresheet.

The starlet played a crucial role in England’s run to the Euros finals this summer. However, the physical toll and disappointing end to the tournament in which Saka missed the decisive penalty kick could be mentally weighing down the player this term.

Saka was on the receiving end of racial abuse after the loss to Italy.

Arsenal boss Arteta is wary of his Saka’s recent dip in form but optimistic about returning to his best.

“That is better than being brilliant and then to struggle, struggle and struggle. So it’s part of his development and I’m really happy with him.”

It is not clear if Arteta and Arsenal would even entertain the notion of a Saka transfer. The player scored seven goals and notched ten assists last season, playing a pivotal role in Arteta’s attack. The 2021 Golden Boy award candidate also signed a contract last season until 2024.

“Some clubs are starting to approach Bukayo Saka, as he’s one of the best players in his position for the future,” said Romano on the HereWeGo podcast.

“Arsenal consider him untouchable. They are planning to build on players like Saka.”

However, Arsenal may have difficulty convincing their academy graduate to stay if the Gunners continue to play outside of Europe.