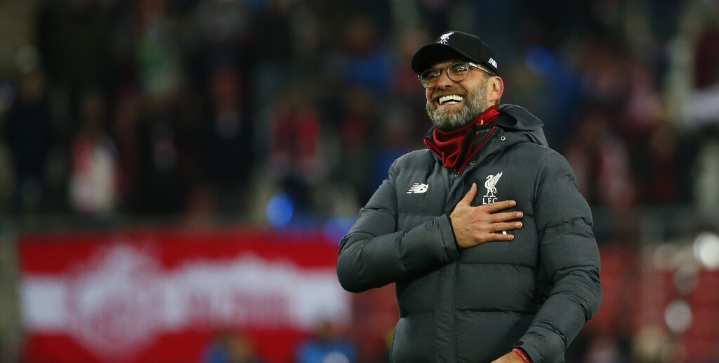 Liverpool boss Jurgen Klopp has signed a new contract at Anfield until 2024.

The new deal extends his stay with the Reds from 2022 to 2024. Provided Klopp sees out the deal, he’ll have stayed at Liverpool for nine years, two more than his time at Dortmund and Mainz.

“That will be good new for some, not so good news for others, sorry,” said the coach who was also named Premier League Manager of the Month for the third time today.

“This club is in such a good place, I couldn’t contemplate leaving,” Klopp added.

All Klopp does is win, nowadays

159 games. 100 wins. One Champions League trophy – the club’s sixth — and a likely Premier League title this year: Klopp’s record at Liverpool speaks for itself.

Klopp is the second-fastest manager to reach 100 wins in the Premier League after Jose Mourinho. Of the last 100 Premier League matches, the Liverpool boss has only lost seven.

The Reds sit atop the table by 8 points, 14 points above reigning champions Manchester City.

Said rival boss Pep Guardiola: “I congratulate him and Liverpool on extending for five years. He deserves it.” The Spaniard has lost nine games to Klopp in total, more than any other manager in his career.

Klopp deserves a statute outside Anfield when he’s done. I hope he never leaves. Fits the club’s vibe so much. https://t.co/USsop08MQA

“We feel this represents one of the big moments of our stewardship of Liverpool Football Club so far as we believe there is no better manager than Jurgen,” said LFC club owner’s Fenway Sports Group (FSG).

“There’s nothing else to say about it. We speak about it in the moment like we do all potential transfers – when it’s sorted, not earlier. A very good player, we can say that!” said Klopp.