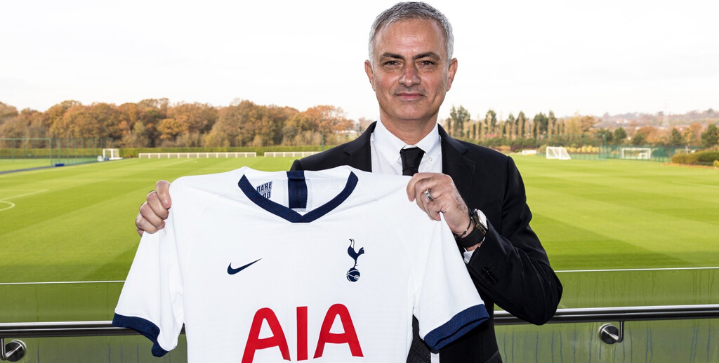 Mourinho will take his first training session this afternoon as Spurs prepare for their away game at West Ham on Saturday.

“In Jose we have one of the most successful managers in football,” said Tottenham chairman Daniel Levy.

“He has a wealth of experience, can inspire teams and is a great tactician. He has won honors at every club he has coached.”

The Portuguese boss has already brought in new staff as well, including new assistant manager Joao Sacramento from Lille.

A shocking 24 hours in North London

No one could’ve expected the turn of events in North London the last 24 hours.

But sacking the beloved Pochettino for the “Special One” is a gamble Spurs are willing to make to get back into the top four. Poch apparently “sulked his way to the sack” along with losing the dressing room.

The Portuguese legend will be looking to add a fourth Premier League title to his collection, including a third Champions League title.

Once asked in 2015 if Mourinho would ever manage Tottenham, he replied: “No, because I love Chelsea supporters too much. I’m Chelsea.”

He will become the third manager to take charge of both Chelsea and Spurs after Glenn Hoddle and André Villas-Boas, with a contract until the 2022-23 season.

“I am excited to be joining a club with such a great heritage and such passionate supporters. The quality in both the squad and the academy excites me. Working with these players is what has attracted me,” said Mourinho on the club’s website.

His hiring may sting crosstown rivals Arsenal who had Mourinho lined up as a possible replacement candidate for Unai Emery. With Luis Enrique’s return to coach Spain, the Gunners have now missed out on two of the coaches on their shortlist.

Things are once again cooking up in North London. With Jose back, the Premier League is condemned to excitement. Grab the popcorn.