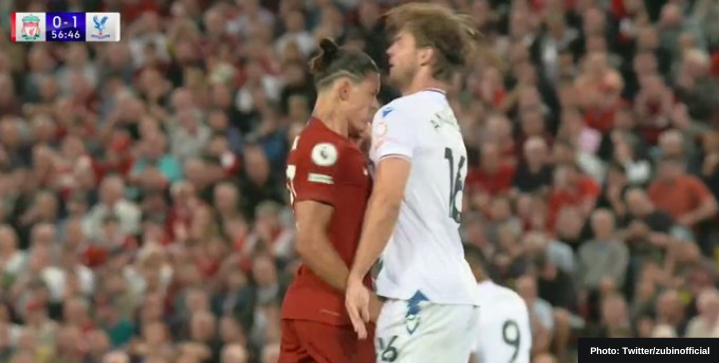 Crystal Palace center back Joachim Andersen says he received “3 – 400” abusive messages on Instagram last night. Some of the messages included death threats to Andersen and his family.

Crystal Palace expects to file a police report to protect their player.

The defender was involved in an incident that saw Liverpool’s Darwin Nunez sent off at Anfield.

The 23-year-old Uruguayan headbutted Andersen in the second half of the match.

A moment of madness for Nunez

It was a shambolic debut for the Reds’ new forward, who’ll now miss three games, including Monday’s clash against the Red Devils at Old Trafford.

“Darwin knows [he let his teammates down]. I will talk to him. It was not a reaction we want to see,” the German said during his post-match interview with Sky Sports.

“He knew he would be challenged in this way, center-halves will do that, but it is not a reaction we want. But we will use the time productively.

Andersen: victim of the headbutt

Andersen demonstrated how easy it was to rattle up the Uruguayan striker, who failed to hit the target with his five attempted shots before the bust-up.

“The whole game I sat really close to him, I annoyed him a lot and did well against him. I think that’s why he was a little bit angry with me,” Andersen said in an interview with Viaplay.

“In that situation, he headbutted me, the first one, at a cross, and I told him he shouldn’t do that. I was angry with him. Then he did it again which is, for me, really stupid. A clear red card.”

Messi, cut from Ballon d’ Or shortlist, tips Benzema for this year’s award