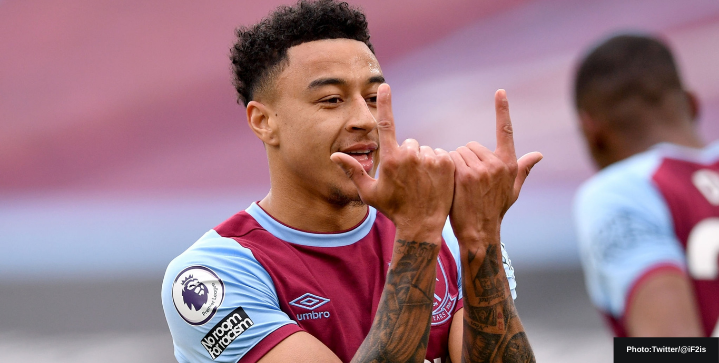 Real Madrid, Inter Milan, and PSG are all monitoring Jesse Lingard this summer given the winger’s stunning return to form.

The Manchester United loanee is back to his best for Aston Villa, scoring 8 goals and providing 4 assists in just 9 games for the Hammers. Those are roughly the same statistics he put up for the Red Devils the last three seasons in 79 matches.

The “comeback king,” who hadn’t played a minute of league football by February 1st, has scored the most Premier League goals since the start of February. Even his own manager didn’t see all the goals coming. “I didn’t expect Jesse probably to get so many goals”, said David Moyes.

Villa’s captain Mark Noble even challenged Lingard to a bet upon his move to West Ham: “As much as Jesse’s goals were fantastic, I had a bet with him when he first came to the club that if he scored 8 goals, I’d pay for a night out for him and a stay in the Corinthia Hotel, so it’s going to cost me a few quid! He’s been fantastic for us.”

The reemergence of “Lingardinho” also earned the player a recall to Gareth Southgate’s latest England squad.

🗣️ "I didn't expect Jesse probably to get so many goals…"

😅 @JesseLingard is even proving his own manager wrong!

🔥 How good has he been since joining the Hammers! pic.twitter.com/2cO1Wf9Fbi

Name a player who's more 🔥 than @JesseLingard in the Premier League right now. We'll wait. pic.twitter.com/L5awXRwzWQ

Where will Lingard play next season?

28-year-old Jesse Lingard is yet to decide his future, but his preference is to play Champions League football next season. He still has one year left on his contract with Manchester United.

West Ham is aiming to sign Lingard to a permanent deal in the summer. Even more, the Hammers are flourishing in a top 4 spot in the Premier League.

While Lingard may well stay put in East London, the likes of Arsenal, Real Madrid, Inter Milan, and PSG may hijack the deal according to ESPN.

Arsenal, in particular, see Lingard as an option of the Gunners can’t land current loanee Martin Odegaard from Real Madrid.

Can't believe we live in a timeline where Real Madrid smashed Liverpool, won El Clasico for a third straight time, and then got linked to The Lord himself Jesse Lingardinho.