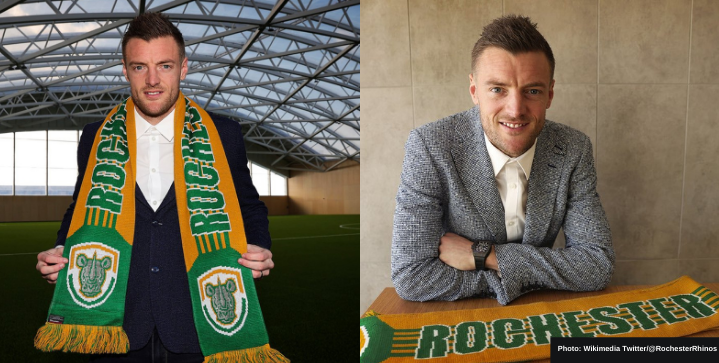 The Rochester, New York-based club haven’t had a competitive team for the last four years but plan on relaunching again in 2022.

Vardy and Rhinos — it just makes too much sense

One of the Premier League’s elite scorers of all-time, it remains unclear whether Vardy plans on suiting up one day for his newly owned club. Some think he’ll play for an MLS club as the first step in his retirement. Either way, he’ll have a front-row seat in reviving the lost Rhinos.

Vardy sees the rebuild as a long-term project. “‘I’m so excited,” Vardy told The Athletic. “I’ve never done anything the normal way,” he added.

He nearly quit football before signing up with Leicester City for £1 million in 2012. And the rest is history: Premier League champion, Premier League Golden Boot winner, and just last year, an FA Cup winner.

He’s chalked 207 career goals to his name, 116 of those in the Premier League where he’s the league’s 19th all-time scorer. He’s also the only player in history to play in all 14 rounds of the FA Cup.

To think Vardy’s hard work and patience won’t pay off with the Rochester Rhinos is futile. Don’t ever doubt the man.