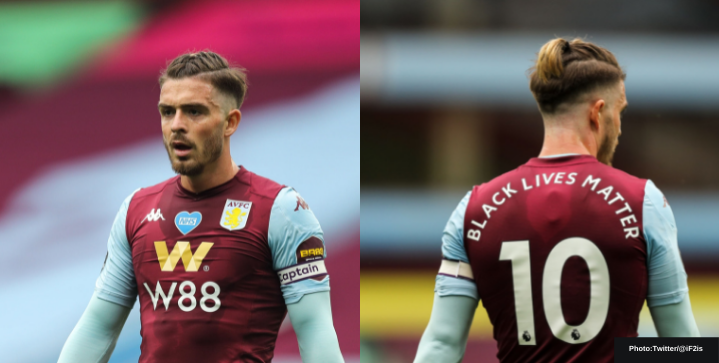 One of the best players in the Premier League for his creativity and dribbling ability, Jack Grealish is also known for his luxuriant hairstyles on the pitch.

Let’s take a look at some of the best Grealish haircuts to date.

Jack Grealish’s go-to style is the modern slicked-back style that should present a nightmare on the field given how long it is. But the player uses Hairbond hair spray — by the bottle it appears — to keep the hair slicked back and out of his face.

The midfielder also uses a blow dryer and wax to style the hair, which is how the look retains its volume despite the constant movement on the pitch.

Jack Grealish on how he uses @hairbond to style his famous hair do #avfc #engger #grealish #jackgrealish #euro2020 #hairbond pic.twitter.com/vh22MHmJH9

This is where it all started. Before Grealish evolved the medium slick back style we know today, he used to wear his hair back super long. Also, the sides were completely shaved.

Probably no surprise to anyone that i rate Jack Grealish and his hair 👌🏻⚽️ #Slick #Baller #Tekkers #AVFC pic.twitter.com/HzsIehqepx

Grealish must have stolen this look from David Beckham. The original on-pitch fashionisto sported the hairband during his time in England circa 2003.

Grealish rocked the hair-do during the end of the 2018/19 season during which he helped propel the Villans back in the Premier League. But he’s also been sporting the look with England during the 2020 Euros.

Grealish is now playing wearing an Alice band; Oh Lord he’s going to be chief rustler in the Prem this season. Opposition fans are going to hate him and I can’t wait 😂

Just in case anyone need’s a reminder: Do not ruffle Grealish’s hair. On occasion, Grealish will dye his slicked-back hair blonde and comb it over short sides.

The second look is priceless 🤣 pic.twitter.com/1AZYM9vRL3

A footballer of many exploratory hairstyles, the Englishman recently wore a blonde-infused high taper fade as warm-up to the summer Euros.

Long on top with hair over the earlobes, Grealish wore the smooth undercut during his time playing in the Championship with Villa. It’s still a style that is popular among the footballing fraternity

There are countless ways to wear long hair but instead of opting for the Alice band, Grealish decided to mix it up with a Gareth Bale-inspired ponytail or man bun. Very hipster.

The midfielder liked to keep his tapered haircut extra high and spiky during his younger days. We imagine he’ll return to this cut at some point, maybe at his next club.

Before Grealish emerged as England’s brightest talents, he used to wear a high comb over with a slim cut on the sides.

Grealish joined Aston Villa as a six-year-old. Here is boy wonder before he decided to throw his hair back.