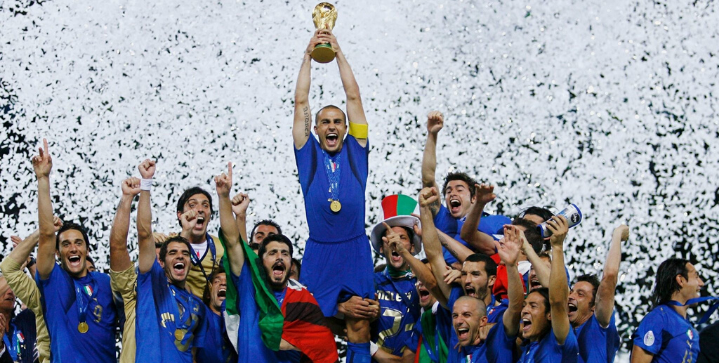 What’s a footballer to do after hanging up the boots? For the 2006 Italian World Cup Champions, the gigs vary from management, coaching, and in some rare cases, still playing (looking at you Gigi). Let’s look at where Italy’s World Cup winners stand today.

Perhaps no one embodies the spirit of football more than Gianluigi Buffon, who made over 500 appearances for Juventus. So it was shocking that after 17 seasons in Turin, he hung up his boots for both club and the national team. But his retirement was brief. Paris Saint Germain reached out to the goalie in the summer of 2018 to reel him back in.

After a year in Paris, Buffon against postponed retirement. Instead, he joined up with Ronaldo at Juventus for another two seasons. Now 44, Buffon is playing in his second season with Parma, where he began his Serie A journey 27 years ago. He signed an extension that will keep him at the club until 2024, when he’ll be 46 years old.

Francesco Totti was 30 years old when he won the World Cup with Italy in 2006. The average player may have been retired by then, but the Golden Boy of Roma was just getting started. Totti officially retired after the 2016/17 season after an unbelievable 25 years, 786 games, and 250 goals with Roma.

Totti briefly returned to Roma for a short stint as club director. He was always a one-club man.

Andrea Pirlo, known for his creative vision and playmaking abilities, helped Italy achieve its 4th World Cup in 2006. Over 13 years with the national side, the midfield maestro earned 116 caps and scored 13 goals. His tenure at Inter, Milan, and Juventus amounted to two Champions League, six Italian League titles, two Italian Cups, and more. In 2015, he left Serie A to play for New York City FC, where he retired in 2017.

Pirlo made his managerial debut as Juventus’ manager at the beginning of the 2020/21 season. But after two trophies and an overall mixed season, the Turin side decided to hire former boss Massimiliano Allegri as Pirlo’s replacement. On June 12, 2022, Turkish Süper Lig club Fatih Karagümrük appointed Pirlo as their new manager.

The pacy left-back Gianluca Zambrotta was one of the masterminds behind Italy’s World Cup victory. He also played 217 games for Juventus, winning two Serie A titles before joining Barcelona after the Calciopoli scandal. He returned to Serie A to play for AC Milan in 2008. Since his official retirement in 2014, Zambrotta has gone from a player-manager role at Swiss club Chiasso to coaching positions in Indian and Chinese football leagues. He also became the gym owner in his hometown of Como, Italy.

Although the clinical defenseman Fabio Cannavaro never won a Serie A title, he played an important role in Italy’s five clean sheets to a 2006 World Cup and subsequent Ballon d’Or. With 136 caps and 4 World Cups over 13 years with the Azzurri, Cannavaro cemented his legacy in Italian football. Since his retirement in 2014, he has coached in Dubai, Saudi Arabia, and China.

In September 2022, the Italian began his adventure as coach of Serie B side Benevento. He joins Italy’s three other World Cup winners — Filippo Inzaghi and Fabio Grosso (managers) — and Gianluigi Buffon (player) in Serie B.

The left-back Fabio Grosso played alongside Zambrotta in Italy’s defensive fortress in the 2006 World Cup run. After stints with Internazionale, Lyon, and Juventus, where he retired in 2012, Grosso took charge of the Juventus youth system. In 2017, he took the coaching job at Bari before picking up coaching duties for Seria B side Hellas Verona. After getting sacked from Hellas Verona, Brescia, and Swiss Super League side Sion over a three year period, Grosso has finally found a permanent manager position at Serie B side Frosinone.

The defensive midfielder played an instrumental role in Italy’s road to the World Cup in 2006. After playing for AC Milan for more than a decade, he switched to Swiss football club Sion where he eventually became player-manager in 2013. He’s since coached Palermo, OFI Crete, and Pisa, leading the latter to Serie B promotion.

After returning to AC Milan to coach its youth system, he became the head coach of the first team in 2017. Gattuso has since coached Napoli — whom he led to the 2020 Coppa Italia — and Fiorentina, where he coached for two weeks before quitting and being linked to Spurs.

The tall Italian striker was a menace up top for the national side and Bayern Munich. After retiring in 2016 at Italian club Verona, he temporarily played sporting director at the same club before finding a new management position.

The attacker played upfront for Juventus for 19 seasons, even sticking with the team through the forced relegation of the Calciopoli scandal. He earned 91 caps and 27 goals with the Italian side, none more precious than his third and final World Cup in 2006, which the Azzurri won. He’s dabbled in various media initiatives since his retirement from football in 2014, including a pundit a spokesperson for the video game Pro Evolution Soccer. Most recently, he became a football analyst for ESPN FC for Euro 2020.

Center back Marco Materazzi will go down in World Cup folklore as the recipient of an epic Zinedine Zidane headbutt in 2006 final. Materazzi played another five years for Inter Milan post World Cup before venturing to India as player-manager for Chennaiyin in the India Super League.

Daniele De Rossi, the youngest player on the Italy 2006 roster at 22, played 18 seasons with AS Roma before spending his final professional career year with Boca Juniors.

The defensive midfielder made nearly 600 appearances with the Roma side, winning the Coppa Italia twice and Supercoppa Italiana once. He’s the 4th most-capped player for Italy, making 117 appearances for the national side.

As of October 2022, Daniel De Rossi is set to start his managerial career with Serie B side Spal. He joins his 2006 World Cup-winning teammates Fabio Cannavaro, Filippo Inzaghi, and Fabio Grosso as coaches in Serie B.