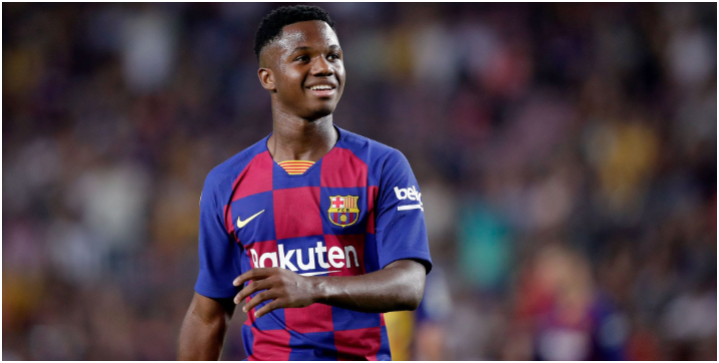 The Bissau-Guinean footballer made his debut for Barcelona in their 5-2 routing of Real Betis at Camp Nou last Sunday. At just 16 years and 298 days old, he became the youngest Barcelona player to play in a La Liga match in 78 years.

The winger’s first coach José Luis Pérez Mena told AS before the match: “Before the game, when I spoke to him, he wasn’t even nervous.”

“I’ve been in the football game for 50 years and I’ve never seen anything like him,” added Pérez Mena, now the director of the Herrera football academy in Seville. ”He’s got huge personality, he doesn’t fear anyone and you only need to see him on the pitch to see that.”

Who is the audacious Ansu Fati?

The stories about the teenager and La Masia graduate Anssumane “Ansu” Fati have been rolling in since his first appearance for the Blaugrana.

Born in Guinea-Bissau, the player entered La Masia in 2013 at the age of 10 after getting spotted at the youth academy of Sevilla. He had already rejected an invitation to Real Madrid the year before.

The prodigy quickly progressed through the youth ranks at Barcelona, most recently playing for Victor Valdes’s Under-19s. However, injuries to Ousmane Dembele, Messi, and Suarez compelled Barca to call up the teenage sensation to the senior team. Fati bypassed the reserves.

“For me, what he demonstrated yesterday was completely who he is,” said the former Barcelona goalkeeper Valdes on Ansu’s performance.

“I was watching him from the first moment he got the ball. That’s Ansu for you… he’s strong, he fast… he’s total anarchy when he gets the ball and when you see talent like that, you have to give those players complete freedom. Let them do what they do and don’t constrain them.”

“He shouldn’t be tied down to playing only on one wing and made to suffer. You have to let them express themselves through their own natural instinct.”

The 37-year-old Valdes even purchased new boots for the youngster. “I told him to bring me his boots and they were a complete disaster, they were causing him pain.”

A debut and a hug from Messi

Fati trained with the first team three days before his debut. But he needed permission from his parents to play in the late-night La Liga match. La Liga requires parental permission for underage players for matches that start after 9 pm.

The teenager entered the game in the 78th minute, giving Ernesto Valverde’s side a solid 12-minute display.

“He has a lot of self-confidence, goes to space, faces one-on-one. He is the youngest player I’ve ever handed a debut, but as with veterans, we look at performance, he can give us good performances and that’s why I gave him his debut,” said Valverde after the match.

The debutant received a hug from Lionel Messi after the match. The 32-year-old magician and La Masia graduate also got his first Barca appearance as a teen, in Messi’s case 17-years-old.

Could Fati follow in Messi’s footsteps? His journey is already off to a promising start.