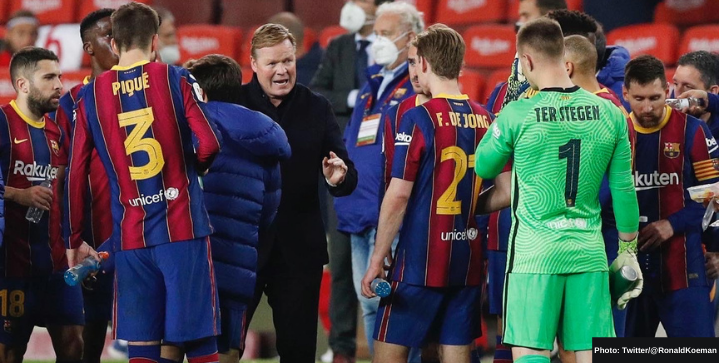 Barcelona manager Ronaldo Koeman appears to be turning things around at the club. Last night’s epic comeback against Sevilla in the Copal Del Rey was case and point.

Down two-nil against the Red-Whites in the first leg, Barcelona stepped up to eke out an aggregate 3-2 victory at Camp Nou.

“This is my happiest night as Barcelona’s coach,” said Koeman after the team’s shocking rally. Gerard Pique’s header tied the game to push extra-time, with Martin Braithwaite completing the turnaround in the 95th minute.

“We always believed. We have never given up on this Copa,” added Koeman. “It is a question of mentality. As coach, I cannot ask my team to give any more than what it did tonight.”

With the win, Barcelona reach their sixth Copa del Rey final in seven seasons. They’ll play the winners of Levante vs. Athletic Club game to be decided later today.

Having completed the comeback against Sevilla, Barcelona now face their biggest challenge this year in the Champions League.

Down 4-1 to PSG in the first leg in the Round of 16, Barcelona are praying for another remontada against the Parisiens.

Barcelona achieved the largest comeback in UEFA Champions League history during the 2016/17 Champions League Round of 16 with a remarkable 6-5 aggregate win against Paris after going 4 nil down in the first leg.

If Koeman repeats another UCL miracle this March and carries on to win the double (Copa Del Rey and La Liga), surely he’s earned the right to a second season — no matter the results of Barcelona’s presidential election results this weekend.