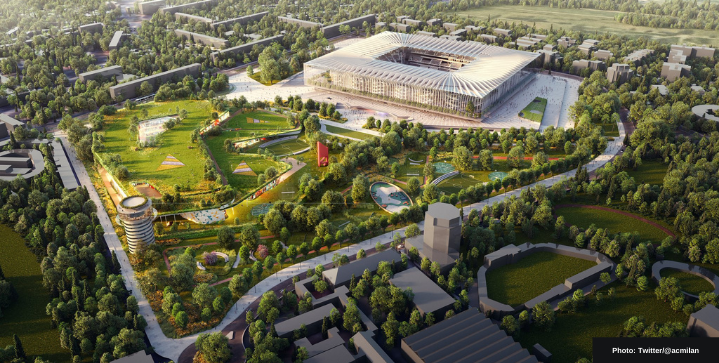 A new era awaits in Milan, Italy as Inter and AC Milan have announced plans to build a new stadium called “The Cathedral.”

The clubs unveiled the first images of the venue today, choosing architectural firm Populous to further lead the design. The Cathedral, slated to open in 2027, features 60,000 seats, state-of-the-art green technology, surrounded by a pedestrian-only leisure district, and 110,000 square meters of green space.

“The decision announced by Comune di Milano last November sees a reconfiguration of the area in the San Siro neighborhood, currently occupied by the Meazza Stadium, through the creation of a new district dedicated to sport and leisure,” issued AC Milan in an official club statement.

“The district will be pedestrian-only, with over 110,000 sqm of green areas (40% of the total square footage). The parking lot, which represents 27% of the total area in the current scheme, will be moved to a dedicated underground area. Most of the sport and leisure activities – located both indoors and outdoors – will be free of charge or affiliated with the City of Milan (“convenzionato”).”

Meanwhile, the iconic San Siro, which will host the opening ceremony of the 2026 Winter Olympics, is expected to be partially destroyed after the construction of the new stadium.