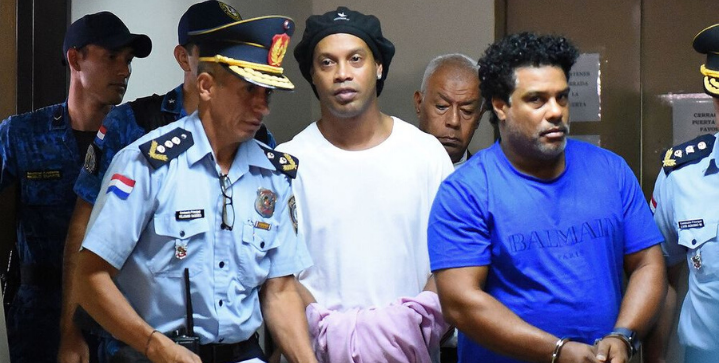 Brazilian football Ronaldinho legend has returned to the pitch, this time lacing them up with fellow prisoners in a Paraguayan jail.

The former World Cup champion is spending six months behind bars for trying to cross into Paraguay on a fake passport two weeks ago.

The 39-year-old is admittedly “sad” about the situation but is doing his best to stay upbeat. He rooms with his brother Roberto, also arrested for forging a passport.

Ronaldinho’s fellow inmates are ecstatic about his presence, of course. They get to play pick-up with the former Ballon d’Or winner and learn a few tricks and flicks from one the most creative players of all-time.

“He can’t play any instruments inside, but I am sure that in his head he will keep on coming up with melodies for compositions when he’s out,” a source close to the player told ESPN.

“He plays football every day and teaches the guys he plays with a few tricks. From the very first moment he wanted to make sure he integrated with the other inmates and he quickly managed to do that.

“He’s an idol for many of them and they have asked for him to sign hats, shirts and trainers.”

Ronaldinho currently has 5 goals and 6 assists in one prison match, leading his 5-a-side squad to one title that included a 16kg smoked pig for his teammates.