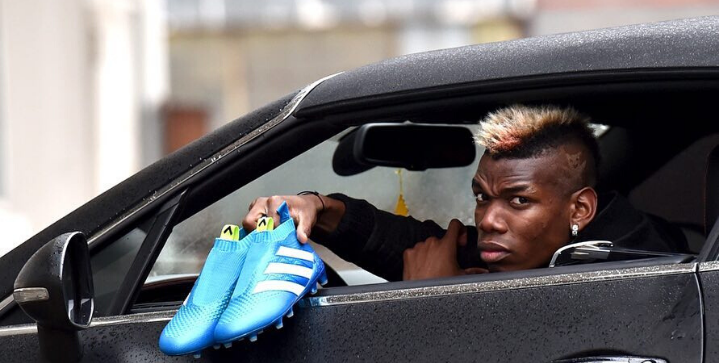 How would you spend your money if you made £290,000 a week? For French superstar and World Cup winner Paul Pogba, that could mean buying a new car to add his growing collection or another haircut. Let’s take a look at how the midfielder — with of net worth $85 million — spends his 24 million euros a year.

We all know Paul Pogba likes to change his hair frequently. So much so that he even has his own hairdresser. That’s right — Pogba has a personal barber he apparently flies around the world to etch a new design or apply dye into his mane. Keep your eyes on his Instagram feed for the latest look.

Worth $23 million, Pogba’s personal Gulfstream G280 jet cruises him around the world for quick getaways to Adidas sponsorship events. It’s the same sized plane as Ronaldo’s as it holds up to 10 people and two crew members. It also includes a bed and comfortable seating for his pals like Romelu Lukaku and Paulo Dybala.

With a private jet and all, why wouldn’t Pogba use it to his advantage? If you follow him on Instagram, you’ll see he likes to hang out in Miami and Los Angeles but he also likes to heads for the fancy islands like Bora Bora as well.

Paul Pogba is never afraid to match his ego with his material appetite. His £2.9 million mansion in Cheshire Northwest England has five bedrooms, a heated indoor pool and sauna, and a leisure suite where he likes to kick back and watch NBA games.

Being sponsored by Adidas, Pogba gets all the freebies in the world. But he also likes the high-fashion priced items like Gucci t-shirts and custom-made hats.

Still in his mid-twenties, Pogba is a video game aficionado. He even met his fashion stylist over Fortnight, the French midfielder can be seen playing Call of Duty as well.

When he’s not playing football, Pogba likes to sit back and play the piano at home. This Steinway and Sons piano is at least $50,000.

Pogba appears to own some fancy wristwatches as well, like this $300k Mac Miller watch that he actually gifted to Nigerian pop star Davido for his birthday. Pogba likes to spend his money on other people too!

What else is Paul Pogba going to do with all that extra cash flow? He can enjoy some expensive dinners of course, like this one at celebrity chefs Nusret Gökçe’s aka Salty Bae’s restaurant in Dubai.

The story goes that Paul Pogba spent some of his first earnings in his first stint with Manchester United on a pair of Louboutins shoes. And thus his obsession with high-fashion items began.

The most clutch football players of all-time