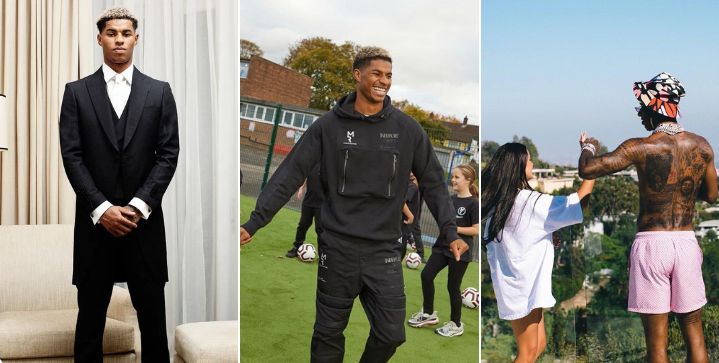 Marcus Rashford is on fire this season, scoring seven goals in his last six games for Manchester United. As of January 2022, he’s struck 15 times in just 25 appearances.

The 25-year-old is in the form of his career, as he promised he would be after an intense workout regiment last summer. And for that diligence and his stellar performances this season, United rewarded the revived forward with a one-year contract extension in December 2022 worth a reported $303,000-a-week plus bonuses.

The forward is estimated to have a net worth of around $30 million. He’s currently valued at $59 million, according to Transfer Market.

As one of the most recognizable athletes in the world, Marcus Rashford has amassed a considerable fortune in just a few years. So what exactly does he do with all that money?

The England international owns a $3 million 4-bedroom brick house in Manchester where he trains and likes to hoop it up on his basketball court, which is conventionally located on his patio.

Besides the modern interior designed by his mother, the rest of the house is full of the player’s memorabilia. Rashford famously scored two goals on his Premier League debut against Arsenal at 18. The number 39 has since acquired the number 19 and then the number 10 under Jose Mourinho.

Based on his keepie-uppie #stayathomechallenge during the COVID-19 pandemic, Rashford’s closet is also full of shoes. Granted, Nike gifted the sneakerhead a customized pair on his birthday.

“Rashy,” as childhood and former United and Three Lions teammate Jesse Lingard once called him, is also an avid watch collector.

The player was most recently spotted wearing an ultra-rare $400,000 red Richard Mille RM 11-03 Automatic Flyback Chronograph McLaren. The case is laced with the distinctive Quartz TPT, making the wristwatch lightweight and durable.

Rashford also owns a $24k Rolex Day-Date (a Jack Grealish favorite), stolen from his home in 2000. The robber turned out to be one of his family’s friends, and Rashford dropped the charges.

While Rashford enjoys spending his millions, he remains committed to using it to improve the lives of those around him. The player is incredibly charitable and has used his wealth to make a difference in many people’s lives.

During the COVID-19 pandemic, Rashford helped raise millions of dollars to feed children in Britain. He famously pushed then-British Prime Minister Boris Johnson to extend the government’s access to free school meals — the same ones the poverty-stricken Rashford depended on during his childhood school days.

In October 2021, Rashford became the youngest recipient to receive an honorary doctorate from the University of Manchester for his charity work. A month later, he received an MBE from Prince William at a special Windsor Castle ceremony.

Rashford has also released four books since 2021, most recently the hit children’s fiction book, The Breakfast Club Adventures: The Beast Beyond the Fence. He also teamed up with British fashion house Burberry to help promote the Marcus Rashford Book Club, which donates thousands of books to libraries across Manchester.