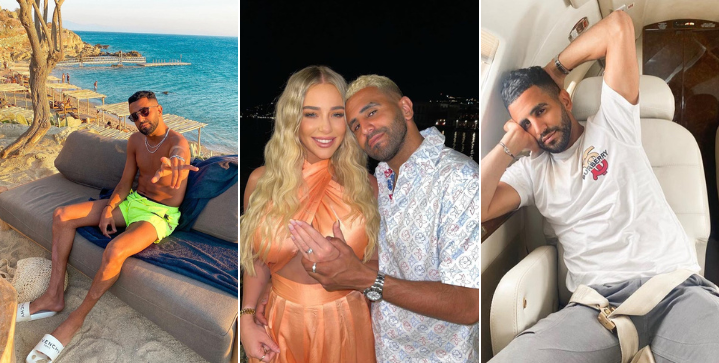 Riyad Mahrez became the most expensive African footballer ever when he transferred from Leicester City to Manchester City for $83 million in the summer of 2018.

He won the Premier League, FA Cup, and EFL Cup in his first season with the Sky Blues, adding to that miraculous Premier League title he won with Leicester City in 2015.

The Algerian winger signed a contract extension with City last summer, earning him $240,000 weekly. He finished the 2021-22 season as the team’s top goal scorer with 24 strikes, getting his third league title with City. Not too shabby for the king of ball control.

The 31-year-old is a mainstay of the City attack. Let’s take a look at how the playmaker spends his millions.

Mahrez lives there along with his partner and model, Taylor Ward, who built a walk-in closet and had marble floors installed. The couple shares a daughter together.

He also owns a BMW i8 in white.

Chances are Mahrez has since replaced those expensive wristwatches but is warier in flashing them in photos — you never know who’s watching.

Mahrez enjoys the occasional luxury holiday and often flies out to some of the world’s most exotic locations. In the summer of 2021, the winger partied with Erling Haaland (then a BVB player) in Mykonos, Greece.

“I saw him in Mykonos and he said to me he really wanted to come. I said you should because it’s the best club. A year later he’s here,” said Mahrez.

Mahrez also likes to spend holidays in Marrakech, as he did after winning the 2021/22 Premier League last season. With traditional souks to boutique hotels and rooftop restaurants, the red city is consistently rated one of the best places to visit in the world.

The Mbappe Aya Nakamura photo that put internet in frenzy