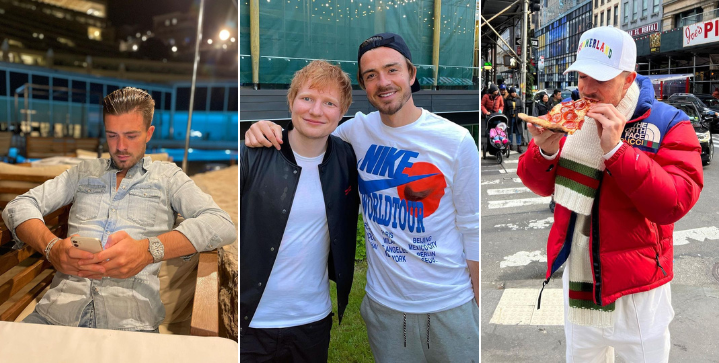 In the summer of 2021, Jack Grealish smashed the transfer record for the most expensive player in Premier League history with his $122 million move from Aston Villa to Manchester City.

His weekly salary with the Cityzens amounts to $387,000 per week, helping notch up his estimated net worth of $55 million.

Despite a slow start to life at Man City, this 2022/23 Premier League season sees Grealish back to his best (along with his new haircuts) — driving the team forward and creating chances for his teammates.

While slowly justifying his bank account, let’s look at some items Mr. Gucci is keen to spend money on.

He also owns a white $100,000 Range Rover Sport, which he crashed in a Birmingham suburb during the Covid-19 lockdown. The “deeply embarrassed” midfielder paid $86,000 in damages and spent nine months without a license.

When Jack Grealish isn’t hitting the pitch, he’s known to attend his custom temple behind his $7.3 million Cheshire mansion home. There he meditates and practices cup therapy to heal his body and mind from the pressures of the Premier League.

The seven-bedroom house sits on 20 acres of land and features a tennis court, golf course, fishing lake, gym, and a massive garden. The 27-year-old also boasts a bonus cottage and helipad, so his family and friends are welcome to stay for vacation and the holidays.

Jack Grealish has spent £6million on a stunning mansion which comes with its own helipad. pic.twitter.com/UfPOKzwoRb

‘Gucci Grealish‘ as he’s become known for securing that $14m a year deal with the Italian brand, is a man of high taste, including what he wears on his wrist.

The outgoing Jack Grealish is a man of many charitable acts. In June 2022, the midfielder signed a three-year deal with Special Olympics GB as principal ambassador. His role is to help spread visibility and drive support for the 1.5 million people with intellectual disabilities in Great Britain.

In November 2020, he raffled off one of his favorite Aston Villa jerseys to raise $67,000 for the National Health Service in England, which played a vital role in battling the COVID-19 pandemic. He also donated another $182,000 from his pocket to a Birmingham hospital.

This kind of attitude makes Grealish not just an influential footballer but an inspiring role model who resources to inspire and help those who need it most.

Grealish is known to party hard. The man likes to travel abroad when he’s got some free time, such as after Manchester City clinched the 2021/22 Premier League title. Grealish jetted to Ibiza and Las Vegas with his close mates to enjoy a luxurious off-season getaway.

Grealish also flew with his snazzy Gucci suitcase and model girlfriend Sasha Atwood to New York City during the 2021 Christmas holidays to tour locations from Home Alone 2, one of his favorite movies. He took down an epic slice of midtown pizza.

Lloris out, Mbappe in? Who will be France’s next captain?