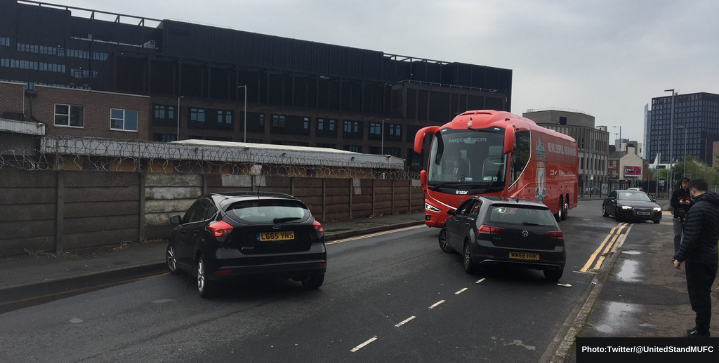 Liverpool used a decoy bus to travel to today’s match against Manchester United at Old Trafford.

Liverpool used the club’s official red bus to dupe protestors at the usual John Gilbert Way entrance while a Line of Duty style black bus with the team on it made its way safely through one of the stadium’s designated car park areas.

Meanwhile, protestors blocked the red bus and punctured the tires. Chants of ‘get that bus’ were heard prior to the bus’s arrival, according to Sky Sports. Thankfully, none of the players were on that bus.

Today’s protests are a follow-up to the original Glazer protests when the two teams were meant to clash 11 days ago. Manchester United nearly faced a points deduction after the fixture was called off.

The two clubs took careful planning to ensure the safety of their players this time around. While Liverpool used the decoy bus, Manchester United players arrived at the stadiums six hours before game time.

The club converted Old Trafford exclusive suites into bedrooms so the Red Devils could sleep before the match.

Now that the game is on, cross your fingers there’s no serious interruptions to complete it.