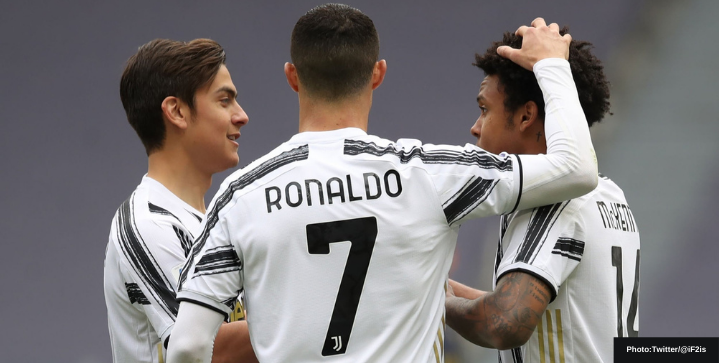 The woes continue at Juventus.

After losing 3-0 to AC Milan and derailing Juve’s chances at Champions League football next season, Italian Football Federation President Gabriele Gravina says he is ready to kick Juventus out of Serie A.

Along with Barcelona and Real Madrid, Juventus are the three teams committed to participating in the Super League.

“The rules are clear. If Juventus is still part of the Super League when it enters next season, it can’t participate in Serie A,” Gravina explained to Naples radio station Kiss Kiss.

“I would be sorry for the fans but rules are rules and they apply to everyone. I hope this holdout ends soon.”

No. Not this match.

Juventus game is over.

Their most embarrassing performance in Serie A in a decade is the mirror of how the club has sunk in 2021.

The wave of shame has carried away even Cristiano Ronaldo anchorage.

The ship has sunk.

No Ronaldo in Champions League nor Serie A next season?

The 3-0 loss to AC Milan on Sunday puts Juventus fifth in the Serie A and a point off the top four with three games remaining. The Bianconeri’s best chance leans on AC Milan or Napoli slipping up points over the next couple of weeks.

What’s even more difficult to imagine is the Champions League without Mr. Champions League himself, Ronaldo. At it stands rate, the Portuguese great will be playing in the Europa League next season.

Juventus signed Ronaldo to cement the club’s place in the Champions League for years to come — not just competing for the European title but winning it.

“He can’t solve everything.. We have seen that he needs the players around him, because in Madrid he had players who made him score goals with great ease and this IS NOT the case at Juventus,” admitted former Juve legend Alessandro Del Piero.

Add Juve’s potential expulsion from Serie A to the list next year, and it comes as no surprise that Ronaldo has already been linked with a move back to Manchester United this summer — the man must keep playing in the Champions League. With his contract expiring at the end of the 2022 season and Juve’s financial issues due to COVID, it may be time for Turin side to move on and cash in on their star man.

Do you think Ronaldo will leave Juventus this summer? Let us know on Facebook.