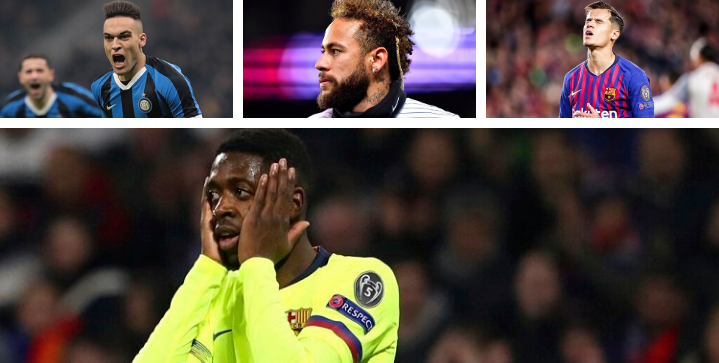 Barcelona have pledged to make significant changes to their roster over the summer given the financial squeeze caused by the Coronavirus.

According to ESPN, only three of Barcelona’s players are safe from potential transfers, including Lionel Messi, Marc-Andre ter Stegen and Frenkie de Jong.

After Messi squashed last week’s shock transfer rumors that he could be swapped for Lautaro Martinez, Barcelona President Josep Maria Bartomeu nonetheless revealed that the forthcoming transfer window would be challenging.

“There is not going to be as much money in the transfer market because of the pandemic. But I predict that we are going to see a lot more swap deals,” said Bartomeu.

Who would be a better fit for FC Barcelona: Neymar or Lautaro Martinez?Quique Setien: "Both of them, because they are good players."Choose one ⬇️

So who’s in and who’s out at Barcelona?

Despite Barcelona’s financial crunch, Bartomeu has pledged to move forward with the club’s transfer targets.

After blocking all of Barcelona’s attempts last summer to sign Neymar, PSG have officially put a €150m price tag on the Brazilian. Barcelona have offered Antoine Griezmann to PSG in a swap deal for Neymar. The Catalan side already put a price tag of €100m on the French star regardless of a PSG’s interest.

Barcelona may ultimately be forced to choose between a Neymar reunion or €111m Inter Milan starlet Lautaro Martinez, who the Catalan side see as a replacement for the aging Luiz Suarez.

“Both of them, because they are good players,” admitted Barca head coach Quique Setien to El Larguero when asked about his transfer preference.

“All the great players, how can I not like them? Neymar is one of them, but as things are, you have to consider what is possible and what is not possible,” admitted Barca head coach Quique Setien.

“We know that these footballers cost a lot of money and that it is not easy to bring them.”

Stay tuned right here to see how all this plays out.

The 10 Best Serie A Players of All-Time