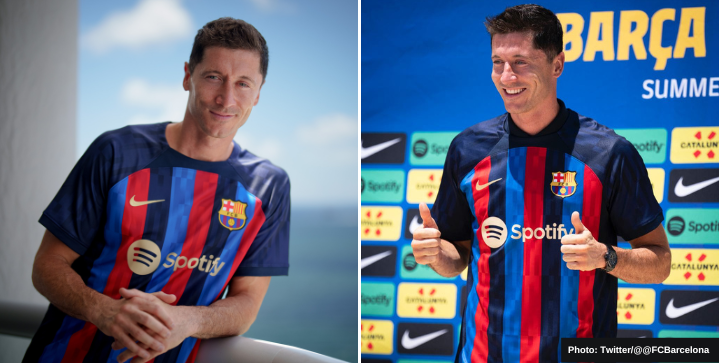 Good luck getting your hands on one of those new Lewandowski Barcelona shirts.

Barca’s megastore is already out of Lewandowski jersey because it ran out of “W” letters. The letter appears twice on the Polish striker’s last name.

Fellow Culers fans lined up to get his fresh Lewy home kit when the store employee shared the bad news.

“Because we don’t have the letters ‘W’. And because he has two ‘W’ in his name we ran out,” said the employee.

The only other player impacted by the scarcity of Ws is striker Martin Braithwaite who’s probably on his way out of the club this summer.

The Catalan giants unveiled their new star signing on Wednesday in Miami.

“I’m finally here. I’m delighted to be at Barca. The last few days have been very long, but the deal is done and now I can focus on a new chapter and challenge in my life,” the Pole told the team’s website.

“I’ve always wanted to play in La Liga and for the big clubs. I’m here to help Barca get back to the top and win as many titles as possible.”

The Barca hierarchy wants to award the No. 9 shirt to Lewandowski, but the number is currently occupied by Memphis Depay — who’ll either have to leave or give up the number.

Lewandowski’s debut match in a Barcelona shirt will be in this Saturday’s El Clasico friendly against Real Madrid.

The club is hoping to raise €20M alone by selling Lewandowski shirts. Let’s see how quickly the Barca fan shop can turn things around.