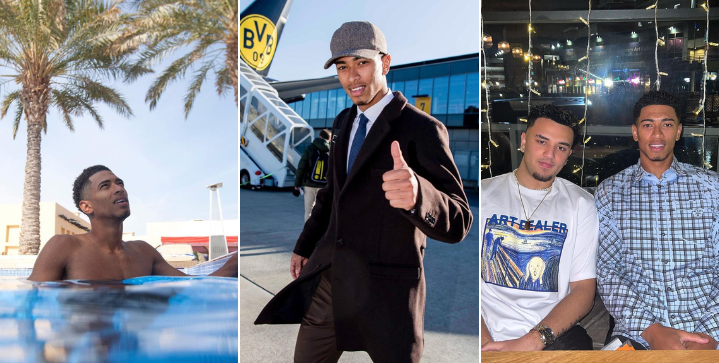 We’re only halfway through the 2022/23 season, and the likes of Real Madrid and Liverpool are considering splashing the $162 million asking price requested for his talents this summer.

BVB paid a mere $24.5 million to sign him from Birmingham City in 2019, making Bellingham the most expensive 17-year-old in the history of football.

The teenage midfielder even topped French sensation Kylian Mbappe as the world’s most valuable player, according to CIES Football Observatory. CIES values Bellingham at $222 million versus $203 million for Mbappe.

Bellingham may just make $3 million a year now, roughly $59k per week, but he’s already living the high life. Let’s take a closer look at how Bellingham spends his money.

At only 19 years old, it’s safe to say Bellingham is still figuring the life part out. And that includes being a responsible homeowner. While he lived with his parents in Birmingham just two years ago, he now resides in a luxurious flat in Dortmund. And by the looks of it, his parents, especially his mom, are there to help him.

“I miss my Dad and my little brother so much,” he said in a 2019 interview. His 17-year-old younger brother Jobe Bellingham plays for Birmingham.

Given the kid’s current market value and links to Europe’s top-tier clubs, it’s safe to say Bellingham is set to add more real estate to his portfolio in the not-too-distant future.

Bellingham still probably prefers to be chauffeured around in his day and age. In fact, his parents drove him to a meeting with Manchester United in a Mercedez Benz in 2020.

In 2022, the 19-year-old faces charges for driving while using his phone. He’s since seen signing autographs for fans out of a white SUV with his mother in the driver’s seat. It looks like he’ll have others take the wheel for the foreseeable future.

But suppose he’s anything like England international teammates Harry Kane, Jack Grealish, and Marcus Rashford, plus former BVB baller Erling Haaland. In that case, Bellingham will be loading up his new garage with luxury cars over the next few years.

When he’s not traveling home to England to visit family and friends, Bellingham likes to jet off to some incredible locations: Dubai, Ibiza, and Toronto, to name a few.

On one of his adventures, he allegedly linked up with 18-year-old Instagram model Asantewa Chitty. It’s not clear if the two are still romantically linked. Not to be worried — Bellingham’s 6.2 million Instagram followers are always waiting for the next revelatory peep into his normally quiet private life.

Bellingham is no stranger to giving to charities. While he’s off the mark in the football world as a top prospect, he also makes sure to give back to the community.

In 2021, he gave away signed shirts to locals and donated funds to build a 275-student school in Mombasa, Kenya.

As time passes, watch Bellingham continue to be a passionate advocate for charitable causes and a true role model for young people everywhere.