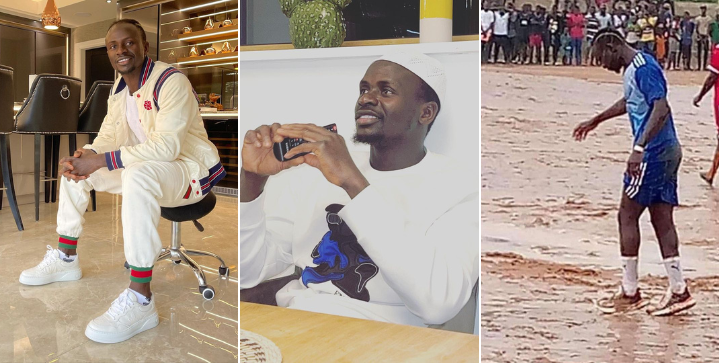 Klopp’s first signing ended a six-year spell at Anfield and completed a $43 million move to the Bavarian side in the summer of 2022 on a three-year deal.

But the huge paychecks don’t stop the AFCON winner from being one of the most humble footballers in the world.

Mane is known to carry around an old cracked iPhone despite his riches and is more interested in using his millions to help the 2,000 people that live in his Senegalese village back home.

“I do not need to display luxury cars, luxury homes, trips and even planes. I prefer that my people receive a little of what life has given me,” he once said.

Let’s take a closer look at how Mane spends his millions.

He may be living the dream of millions of Africans, but Sadio Mane never forgets where he came from. The 30-year-old is as generous as they come.

“Why would I want 10 Ferraris, 20 diamond watches, or two planes? What will these objects do for me and for the world?

“I was hungry, and I had to work in the field; I survived hard times, played football barefooted, I did not have an education and many other things, but today with what I win thanks to football, I can help my people,” he once told Ghanian outlet nsemwoha.com.

In June 2021, Mane donated $618k to help construct a public hospital in his hometown of Bambali, Senegal, a village 250 miles from the capital of Dakar. That followed his $51,000 contribution in March 2020 to help those struck by the COVID-19 pandemic.

In 2019, Mane donated $310,000 to build a secondary school in Bambali and continues to reward the best-performing students with extra funding and computers.

He also regularly sends thousands of dollars in jerseys, clothes, and shoes back home on top of the $75 stipend he provides to those villagers of working families. Mane is currently working on building a post office and establishing a 4G internet connection in his village.

Despite his incredible modesty and humanitarian efforts, Mane does still spend some money on high-end cars. Take the Mercedes G63, for instance, known for its high $200,000 price tag and exclusivity.

He also rides to and from Bayern practice with a “chauffeur”, his good friend and Bayern Munich II professional footballer, Désiré Ségbé Azankpo. Mane always drives a modest car when he attends prayer at the mosque.

The Senegalese footballer likes to keep his homes under wraps, as most footballers do. But he’s built a 4-bedroom mansion in his native country of Senegal. It includes a jacuzzi, pool, spa, and small pitch in his back garden.

He also owns a $2 million house in Allerton, Liverpool, which he bought upon signing for the Reds in 2016. The house was burgled twice while he played away in Champions League matches in 2019, the year Liverpool won the European tournament.

Mane holds a home in Mallorca, Spain, and temporarily moved into Thiago Alcantara’s former house in Munich as he seeks a long-term residence.

The 11 Best Stadiums in Germany