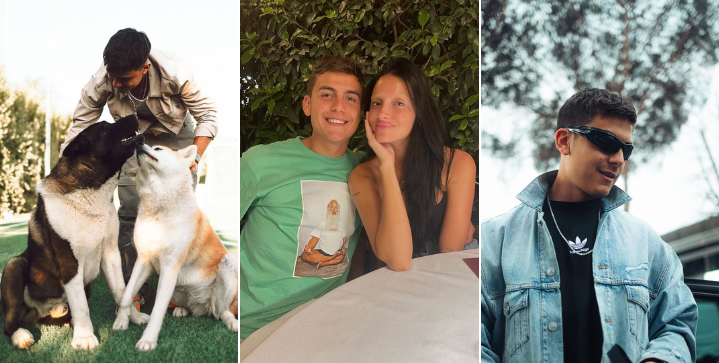 AS Roma star Paulo Dybala is one of football’s most versatile and creative sparks. He’s also one of the most popular, as witnessed by his selling 535,000 kits in 24 hours upon his signature for AS Roma during the summer of 2022.

At 29 years old, Dybala has earned millions from his contracts and endorsements. He’s rumored to have a net worth of $40 million as of 2022 after making $15 million per season at Juventus. He currently owns $6.4 million per year plus bonuses in Rome.

To cap it off, La Joya won the 2022 World Cup with Argentina. He’ll share a piece of the $42 million given to La Albiceleste for their triumph over France.

With such a hefty income, Dybala can live like a king. But what does his lavish lifestyle entail? Let’s take a look at how Dybala spends his millions.

Dybala owns a breath of cars in his garage. But nothing compares to the fastest roadster in his collection: the $3 million Bugatti Chiron.

This multi-million dollar stunner goes an insane 304 mph at its top speed.

Dybala also owns a car as fast as him: a yellow $417,000 Lamborghini Aventador that hits speeds up to 217mph. He often takes his model girlfriend, Oriana Sabatini, along for the ride.

But the Argentine is an everyday bloke as well. The forward also drives around a more modest $65,000 Jeep Grand Cherokee.

It once seemed that the Argentinian striker would be dressed in Black and White Stripes forever. After all, he framed Juventus hero Andrea Pirlo’s shirt and hung on it on the wall.

Back in 2020, Dybala debuted his Turin home on MTV UK Cribs, showing his three bedrooms, piano room, and den, where he likes to do a little rest and recovery.

In 2021, burglars broke into the house and stole Dybala’s expensive watches. Neither Paulo nor his girlfriend was present.

Dybala is a watch aficionado, much like some other football stars, counting Kylian Mbappe and Cristiano Ronaldo among them. For one, Dybala is a brand ambassador for minimalistic and affordable luxury watchmaker Daniel Wellington.

But La Joya is also a wearer of luxury watches like the $50,000 Patek Philippe Annual Calendar in 18k rose gold with a white opaline dial. He also sports the $500,000 Rolex Daytona Rainbow 116595RBOW containing nearly 100 sapphires and diamonds, which you can see in the Lamborghini video above.

He may have a rich lifestyle, but Dybala is also generous with his money, donating to multiple charities and organizations throughout his career.

In 2020, he pledged one percent of his salary to Juan Mata’s ‘Common Goal,’ which is to invest in and empower the lives of the underprivileged.

Lloris out, Mbappe in? Who will be France’s next captain?