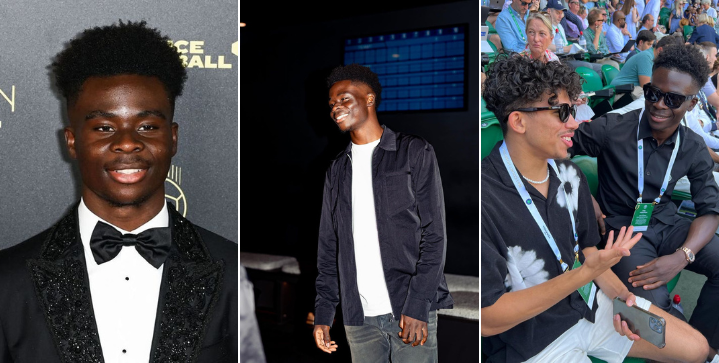 Arsenal sensation Bukayo Saka has come a long way since his debut as an 18-year-old in 2018.

His remarkable stardom has seen him emerge from the Hale End academy to a guaranteed starter, making headlines every game.

Saka’s versatility as a winger, left-back, and midfielder, combined with his quick-thinking intelligence and strong dribbling ability in one-on-one situations, make him a lethal threat.

Given his vital importance to the club and the title charge this term, Arsenal are looking to reward the player with a massive new contract worth at least $200k per week. Other clubs are also vying for his talents and will try to lure the player with even bigger offers.

While we await Saka’s next big money move, the 21-year-old earns $85,000 per week in North London — not too shabby. He even has his own signature boot with New Balance.

Let’s take a closer look at how Saka spends some of that money.

Like Jude Bellingham, Saka isn’t ready to be a solo homeowner or family man just yet; he’s rumored to be dating model and social media influencer Tolami Benson.

Saka lives with his family in a six-bedroom mansion in Hertfordshire, north of London. He allegedly bought the house in November 2019 for $2.8 million, one year after signing his first professional contract with the Gunners.

The footballer built a pitch along with a gym, spa, and ultra-modern kitchen that offers plenty of open space and light.

While Saka’s cars are a far cry from England teammates Marcus Rashford and Harry Kane’s luxury rides, they still give the modest youngster some extra swagger when driving around town.

While Saka is modest in his means and fashion — he has zero tattoos — he does have good taste in high-end watches.

He owns a Rolex GMT-Master II in 18 kt white gold with a 24-hour rotatable bezel. He’s also got some serious Louis Vuitton luggage to boot.

Let’s say we can expect more of Saka walking the Ballon d’Or carpet to see what else he owns in his collection.

Even though he’s amassed a fortune, Saka is still generous with his money.

In 2022, Bukayo partnered with Big Shoe to pay for 120 kids from Kano, Nigeria, to undergo life-changing surgery ahead of the World Cup. Saka’s parents are Nigerian.

“I feel blessed to be in a position where I can contribute to making the children’s lives better through these surgeries,” said Saka.

For someone so young, it’s clear why he’s so beloved by Arsenal fans and the global community.