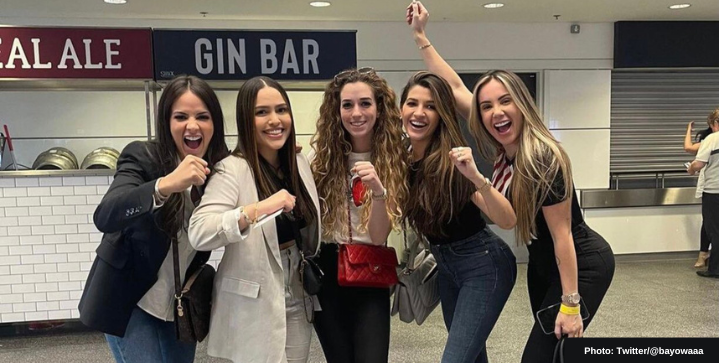 Jurgen Klopp’s Liverpool continues to be one of the best teams in Europe, having made three Champions League final appearances in the past five years.

But who are the partners and football soulmates supporting and empowering the players on the pitch and back home?

Here are some of the hottest WAGS (wives and girlfriends) of players on one of the world’s most historic clubs.

Signed to Liverpool from Roma in 2018 for a £67m fee, the Brazilian goalie Alisson Becker played a vital role in bringing Liverpool its first Champions League trophy since 2005.

After graduating as a physician, Alisson’s wife, Natalia Loewe, joined him during his stint at AS Roma. Today, she serves as a doctor for the United Nations and has become a World Health Organization Goodwill Ambassador.

“My wife Natalia left Brazil five months after graduating to be with me,” said Alisson.

“That meant a lot to me. I enjoyed supporting her while she was finishing her studies at university.

“I guess that made me a bit different to other footballers. And, if you don’t feel well, it’s better to be living with a doctor than a model.”

The couple has three kids.

Natália is already a medical doctor & a health advocate. Not the only Becker to have a safe pair of hands 🙌 pic.twitter.com/1mpUrIQmvf

Since signing with Liverpool from Southampton in January 2018 for a club-record £75 million, van Dijk has helped the Reds to three Champions League finals — one victorious — and the club’s first-ever Premier League title in 2019.

Virgil first met Rike Nooitgedagt back in Holland during his playing days at Willem II. The power couple, who officially married in 2017, has three kids

'We need to respect greatness': Virgil van Dijk heaps praise on 'unnatural' Lionel Messi. The @LFC star remains dignified in defeat after missing out on winning the #BallonDor

The veteran English midfielder has been the heartbeat of the Liverpool squad since the departure of Steven Gerrard in 2015.

Henderson met his partner in crime, Rebecca Burnett, during his early career at Sunderland before marrying her in 2015. The couple has two daughters. Like other WAGs on this list, Burnett leads a relatively quiet life with little social media presence.

One of the best wingers of the modern era, Sadio Mane has easily stitched his name into the Liverpool history books. The Senegalese man has scored 120 goals and provided 48 assists in 268 appearances, earning one Champions League title and Premier League title a piece.

Mane’s love interest, Melissa Reddy, is also a football fanatic. The South African is a 33-year-old senior reporter for Sky Sports. She’s also the author of the book Believe Us: How Jürgen Klopp transformed Liverpool into title winners.

Sky Sports is pleased to welcome @MelissaReddy_ as a Senior Reporter 🤩📺 pic.twitter.com/pfKeOfdkUM

The Scotsman met the love of his life, Rachel Roberts, while both were studying at St. Ninian’s College in their mid-teens. Roberts is the founder of Orosports, an emerging sportswear clothing line for UK women. The couple has two kids.

In recent years, Roberto Firmino has been the best No. 9 in the Premier League, becoming the top Brazilian scorer in the league’s history with 71. He also played a vital role in getting the Reds to their Premier League and Champions League titles.

Firmino is married to social media influencer Larissa Pereira, whom he met in Brazil in 2013. The two married in 2017 and have three daughters.

Mo Salah is the Reds’ 9th all-time leading goalscorer with 156 strikes in 253 appearances. The three-time Golden Boot winner has won both a Champions League and Premier League title with the Reds and the cup double during the 2021-22 season.

Salah met his wife, Magi Sadeq, in grade school back in Egypt. The two officially married in 2013 when Salah was playing with FC Basel. The couple has one daughter together.

Do you know these details about Mo Salah's spouse, Magi Sadeq? – https://t.co/mOY3qorldL pic.twitter.com/g7Cg9uaslA

The Brazilian defensive midfielder Fabinho played a crucial role in Liverpool’s 2019 Champions League title. The successor to Javier Mascherano, Fabinho excels at winning back the ball, making plays, and is a swift passer.

Fabinho met Rebeca Tavares while the two were playing professionally at AS Monaco. The couple has been married since 2015.

Fabinho's wife Rebeca Tavares and Perrie Edwards are both red, what a time to be alive 🔴 😍 pic.twitter.com/Lm2bQOsC4Y

The former Bayern Munich central midfielder joined the Reds to kick off the 2020/21 season and has added two more trophies — an FA Cup and EFL Cup title — to his trophy vault. He narrowly missed out on another Champions League title with the Reds this season — he previously won one with Barcelona and Bayern Munich.

Thiago Alcântara met his now-wife, Julia Vigas, in Barcelona in 2013 before tying the not in 2015. She is co-owner of the Terra Mar Hotel in Barcelona with her brothers while also running a popular Instagram account with 157k followers.

The English midfielder joined Liverpool from Arsenal on the final day of the 2017 summer window. He’s since made over 100 appearances for the club, winning the 2019 Champions League and Premier League a year later.

Oxlade-Chamberlain started dating Little Mix singer Perrie Edwards back in 2017. The couple have one kid.

Congratulations to Alex Oxlade-Chamberlain and Perrie Edwards who revealed they’re having a baby 🥳 pic.twitter.com/nAPGkUtcnA

Liverpool given edge in double transfer swoop for Nunez and Bellingham