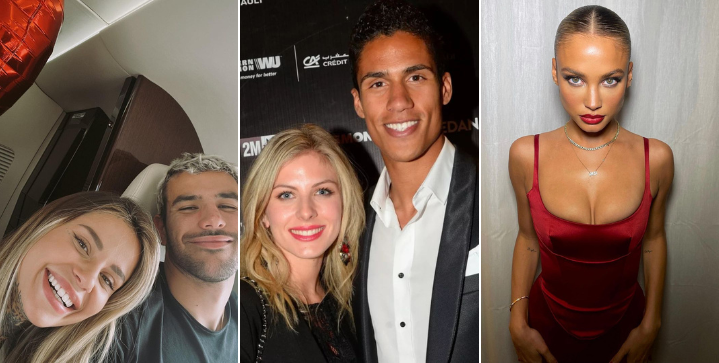 Football powerhouse France is aiming to win its second consecutive World Cup. Let’s look at the partners and passionate souls supporting and motivating the players to lift the nation’s third World Cup trophy.

Here are some of the hottest WAGS (wives and girlfriends) of players in one of the World Cup’s biggest teams, featuring models and social media influencers.

While it remains unclear who Kylian Mbappe is dating, he is rumored to be romantically linked with 27-year-old model Rose Bertram.

The 23-year-old superstar met Bertram during one of his ambassador roles for the Parisian fashion house Dior. The Belgian-born model has nearly a million Instagram followers of her own, with stints for globally renowned brands H & M and Loreal. The supermodel is the ex-wife of Dutch international and former PSG player Gregory Van Der Wiel, with whom she shares two kids.

Mbappe was also recently rumored to be dating famous trans model Ines Rau. In November 2017, she became the first transgender model to appear on the cover of Playboy as “Playmate of the Month.”

The two were seen together at the Cannes Film Festival in May 2022, followed by images of the couple on a nearby yacht.

32-year-old Rau has over 1 million Instagram followers and an autobiography entitled Woman, where she addressed her gender reassignment surgery as a teen.

All eyes are on the future Ballon d’Or and potential double-World Cup winner on whom he will date next.

One thing is sure: you can never count out Olivier Giroud despite his so-called “go-kart” status, as Benzema once belittled him. The French striker is France’s top all-time scoring leader and looks to add a second World Cup title in Qatar to his trophy vault.

But who is his wife of 11 years, Jennifer Giroud? 38-year-old Jennifer stuck by her man even as he was caught with his pants down with model Celia Kay in a hotel room in 2014, one night before an Arsenal match.

Olivier met Jennifer at the start of his club career at Ligue 1’s Montpellier HSC. The couple enjoys vacations with their four young children: Jade, Evan, Aaron, and Aria.

While a string of injuries at Barcelona has hampered winger Ousmane Dembélé over the years, the two-footed dribbler is off to a promising injury-free start this year.

Many fans credit his Moroccan wife, Rima Edbouche, for stabilizing the winger’s career. The two wed in Dec 2021 after dating for years while Dembele built his career at Rennes, Dortmund, and Barcelona. The two welcome a baby girl in September 2022.

Edbouche is a private person, although she once led one of the more popular accounts on Tik Tok for a while, with thousands of followers.

Still one of the best center-backs in the world, and certainly in Real Madrid history, Raphael Varane is competing for his second-consecutive World Cup in Qatar. The 29-year-old is already a four-time Champions League winner and three-time La Liga champion.

Varane started dating Camille Tytgat, now his wife, back in high school in Lille. The two married in 2015, while Varane was a first-team regular at Madrid and she was wrapping up her law degree. The couple now has two children and reside in Manchester as Varane makes his second season with the Red Devils.

AC Milan star Theo Hernandez was part of the France team that won the 2020/21 UEFA Nations League trophy. The French left-back also has a Champions League title from Real Madrid.

The couple has one child together.

Tottenham star Hugo Lloris has been one of the best Premier League goalkeepers since his North London arrival in 2015. The Frenchman helped guide Spurs to a Champions League runners-up trophy in 2019, one year after he protected the goalposts for France during their 2018 World Cup glory.

Off the field, Hugo is supported by his wife, Marine Lloris, who’ve been together since tying the knot in 2012. Marine is an accredited social psychologist and the founder of the children’s clothing label Manege en Sucre, long supported by Hollywood celebrities Jessica Alba and Eva Longoria. Marine promotes her brand and shares images of her family with her Instagram audience of over 100,000 followers.

Forward Antoine Griezmann is one of France’s all-time top goal-scorers. The 31-year-old met his wife, Erika Choperena as an up-and-coming striker at Real Sociedad in 2011. Spanish native Choperena was a psychology student at university at the time before becoming the child psychologist she is today.

32-year-old Choperena is also an avid photographer, sharing high-end images of the couple’s three children — remarkably, all born on the same day in different years, April 8 — to her audience of 320k Instagram followers.

23-year-old French midfielder Matteo Guendouzi has been a rising sensation since his early days at Arsenal. While his days in London were numbered, he’s since taken his talents to Marseille, where he’s thrived.

Matteo is married Mae Rfsk in December 2019, whom he during his days as a Gunner. The two share one daughter, Mayleen, whom they seem to travel with all over the world.

22-year-old defensive midfielder Aurélien Tchouaméni continues to see his stock rise after his stellar performances at World Cup Qatar. He scored that beautiful outside-the-box rocket in the quarter-final against England.