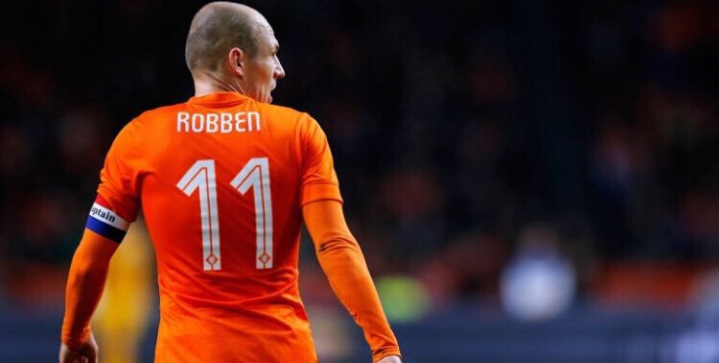 The Netherlands continues to produce some of the best footballers in the world. Known for their mastery of technique and in-game intelligence, the Dutch national team has finished runner-ups at the World Cup three times, along with one European Championship in 1988. Here’s a list of Dutch players who got them there, ranked by their number of team caps.

The most capped Dutchman, Wesley Sneijder has played 134 games with The Netherlands. After a quarter-final exit in the Euro 2008 tournament that named him one of the best of the competition, he helped lead the time to the World Cup finals in 2010 where Holland lost to Spain 1-0.

The commanding goalkeeper, Edwin van der Sar, often considered one of the best goalkeepers of all-time, was once the most capped player of The Netherlands with 130 appearances. The former Dutch footballer of the year helped take the national side all the way to two Euro semifinals, in 2000 and 2004, and achieved one World Cup semi-final, where Holland lost to Brazil in penalty kicks.

The Dutch defenseman Frank de Boer made 112 appearances or the national side, becoming the first Dutch player to earn 100 caps. He played in two World Cups and three European competitions over his 14 career with The Netherlands. While he went trophyless in international play, de Boer won the Eredivisie five times, along with two league cups at Ajax and another league title while at Barcelona.

With 109 games, the attacking midfielder Rafael van der Vaart is the fourth-most capped player on the Dutch squad. He made his senior team debut at the age of 18, playing in three Euro campaigns and featuring prominently in two World Cups. He finished his tenure with 25 international goals.

Giovanni van Bronckorst played over 100 matches for the Oranje, captaining the side during his last World Cup ride in 2010. The former midfielder turned left-back scored a screamer to help Holland win their 2010 semi-final against Uruguay.

Giovanni van Bronckhorst with a wonder strike for Holland at the 2010 World Cup pic.twitter.com/LFMi7kJAW8

The Dutch forward Dirk Kuyt earned 104 caps with Holland, scoring a total of 24 goals. He played in two Euros and two World Cups, the latter in which he started in all seven games en route to the finals against Spain.

With 102 caps, the Dutch forward Robin van Persie enjoyed a couple of spells of success at the international level. He helped lead The Netherlands to the 2010 World Cup final where the team lost against Spain. In 2014, then captain Van Persie scored one of the best goals of the 2014 tournament with a one-time flying header off a 40-yard lob. He remains Holland’s top all-time scorer with 50 goals.

The defensive “playmaker” midfielder Phillip Cocu is the fifth most capped Dutchman on the national team, earning one game just over the century mark. A latecomer to the Oranje, he got his first call at the age of 25 and ended up playing in three Euro tournaments — he wore the captain’s armband in 2004 — and two World Cups.

Playmaker Arjen Robben (Real Madrid, Bayern Munich) played over 14 years with the Dutch side, earning 96 caps and scoring 37 goals. Upon leading the team to the World Cup final in 2010, the speedy right-winger was a finalist for the 2010 Golden Ball. FIFA nominated him with the same award in the 2014 World Cup, where Argentina kicked out Holland on penalties in the semifinals. Robben became team captain in 2016 before retiring in 2018, given Holland’s failure to qualify for the World Cup.

The midfield maestro and left wing-back Daley Blind was a member of the Dutch side that finished 3rd in the 2014 World Cup. At 32 years old playing with an implantable cardioverter-defibrillator, the seven-time Eredivisie winner continues to get call-ups to the Holland squad.

The center back played for Holland for eight years, collecting 87 caps and scoring seven goals. He played in two European Championships and two World Cups, the latter which ended in a 1-0 defeat to Spain in the final.

The versatile central midfielder Clarence Seedorf played 87 games over a fourteen-year career with the Dutch national side, scoring 11 goals. He helped the Netherlands achieve semifinal success in the 1998 World Cup and the 2000 and 2004 Euros.

The speedy Dutch winger only earned 86 caps with the Oranje over eleven years, scoring 17 goals. He featured in two World Cups and three Euros.