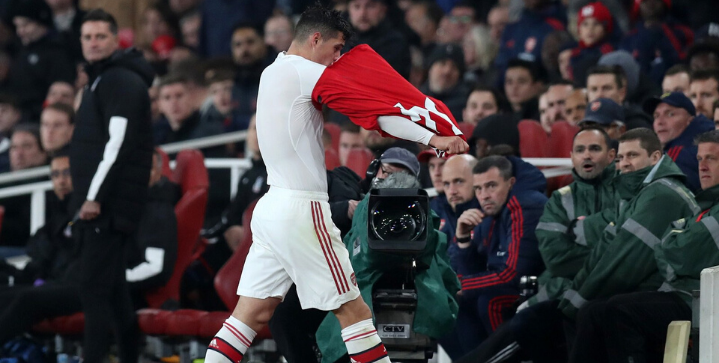 Arsenal right-back Hector Bellerin has called for team unity after Granit Xhaka threw a temper tantrum in reaction to a whirl of boos at the Emirates. The game ended in a 2-2 draw.

The incident occurred in the 61st minute when Emery substituted Xhaka for Bukayo Saka. As the Arsenal captain walked off the field, fans met Xhaka with a collection of jeers and boos.

The Swiss international reacted by throwing the captain’s armband on the ground, telling fans to “f**k off,” and cupping his hand over his ears. He ripped off his kit before storming past Emery right down to the tunnel.

How Unai Emery and players reacted to Xhaka’s tantrum

“He was wrong. We need to stay calm and speak to him internally about that. He was not right to do that,” said Unai Emery after the match.

“We are working with the club and the players to play under pressure.

“We are going to speak with him because the reaction was wrong. We are here because we have supporters. We work for them and need to have respect for them when they are applauding us and criticizing us.”

“We are all humans, we all have emotions, and sometimes it’s not easy dealing with them,” tweeted Bellerin.

“It’s time to lift each other up, not to push each other away. We only win when we are together.”

The Gunners sit 5th in the Premier League table with Manchester United just two points behind. How the Gunners react on the pitch in Wednesday’s Carabao Cup tie against Liverpool — should Emery still be boss and Xhaka captain by then — will speak volumes.