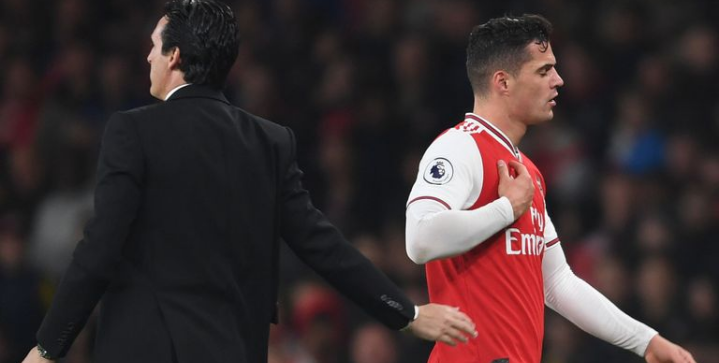 After telling fans to “f**k off” in last weekend’s match against Crystal Palace, Granit Xhaka issued an official apology to fans on social media.

“After taking some time to reflect on what happened on Sunday afternoon, I would like to give you an explanation rather than a quick response,” read the statement.

“The scenes that took place around my substitution have moved me deeply. I love this club and will always give 100 per cent on and off the pitch.

“My feeling of not being understood by fans, and repeated abusive comments at matches and in social media over the last weeks and months have hurt me deeply.

“People have said things like “we will break your legs”, ‘kill your wife’ and ‘wish that your daughter gets cancer’.

“That has stirred me up and I reached boiling point when I felt the rejection in the stadium on Sunday.

“In this situation, I let myself be carried away and reacted in a way that disrespected the group of fans that supports our club, our team and myself with positive energy. That is not my intention and I’m sorry if that’s what people thought.

“My wish is that we get back to a place of mutual respect, remembering why we fell in love with this game in the first place. Let’s move forward positively together.

Was it a legit apology?

Despite the Swiss international’s formal apology, many Arsenal fans and pundits alike still have mixed feelings about it. The letter never explicitly says sorry and appears to put the onus back on the fans for booing.

Emery is also at fault for the team’s lackluster performances with Xhaka acting as the lightning road for what is ultimately the coach’s decisions.

Said former Gunner Martin Keown: “I blame Emery for making him captain. Emery has to make the right calls. He’s not doing it. Xhaka should have apologized far sooner.”

Still, some fans are forgiving and ready to move on from the issue.

I’m glad he’s owning his part in it whilst not letting the fans off the hook.

Those fans caused the problem after Xhaka didn’t do anything except make some mistakes. Everyone has always said how hard he works off the pitch, you can’t fault his effort.

Even Manchester City boss Pep Guardiola has chimed in on the Xhaka issue with the proposal to maintain his captaincy and get on with things:

“He’s the captain because he has something special in the locker room,” said Guardiola. “It has happened, sometimes you lose control. It will be forgotten and move forward, hopefully in the future the fans can forgive him and Xhaka can come back and show what an incredible player he is.”

Xhaka will sit out sit against Wolves

While Emery has not stripped Xhaka’s of his captaincy, he has ruled the 27-year-old out of tomorrow’s match against Wolves.

“The first is the person, the human. Like everyone he feels, Xhaka, with his issues, needs time to recover normality,” said Emery.

“He said sorry, he gave the apology to the supporters and to everybody. Now is the focus on the match.

“We were waiting on Monday and Tuesday (to sort out the captaincy).

“It is not in my mind that he will play tomorrow. I am thinking tomorrow he is not going to play.

“Now we need to be focused 100 percent only on the match. We are going to do the training today but at the moment it is not in my mind.”