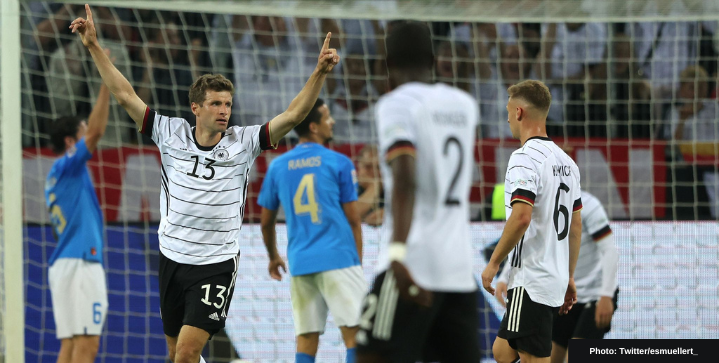 Germany is a powerhouse in the world of football, and their all-time top record scorers are a testament to that.

Names like Gerd Muller, Miroslav Klose, and Lukas Podolski are some of the most prolific scorers in the history of the sport. These three men, along with many others, have helped Germany to become one of the most successful footballing nations in the world, with four World Cups.

Oliver Bierhoff is best known for scoring both of Germany’s goals in the 1996 UEFA European Championship final, which gave Germany its third title. Bierhoff, an in-air heading specialist, scored 37 goals in 70 appearances for his country and represented Germany at the 1998 FIFA World Cup, Euro 2000, and the 2002 FIFA World Cup.

In his prime, Michael Ballack was a force to be reckoned with. The German midfielder was known for his powerful shot and tenacious play. During his career, Ballack scored 42 goals for his country, making him the ninth-highest-scoring German player of all time.

In addition to his impressive goal total, Ballack helped lead Germany to the 2002 World Cup Final and the 2008 UEFA European Championship. He was named German Footballer of the Year three times.

Uwe Seeler is often regarded as one of the best German footballers in history, making Pele’s list of FIFA’s 100 greatest living players in 2004.

The striker scored 43 goals in 72 caps for West Germany, making the FIFA World Cup All-Star team in 1966, where Germany finished as runner-up. He scored a remarkable back-header goal against England in the World Cup quarter-finals in 1970.

The ever-versatile Thomas Muller is one of those rare talents that can play the forward position and operate the winger and midfielder roles. He combines consistent technical ability, creative movement, and strong football aptitude.

Muller won the Golden boot at the 2010 World Cup, finishing with eight goals and three assists, and the silver boot during Germany’s triumphant 2014 World Cup run. While still productive at 33, Qatar could be his last World Cup for the one-club Bayern Munich man.

Bayern Munich’s fourth-top goalscorer of all-time, it’s no surprise that Karl-Heinz Rummenigge has retained his spot on this exclusive goal-scoring list.

The forward notched 45 goals for the national side, playing a part in two consecutive runners-up finishes at the 1982 and 1986 World Cups.

Jürgen Klinsmann was the first player to score in three consecutive World Cups. He also won his first World Cup in 1990 with the DFB. With 82 caps and 40 goals, the former striker went on to coach the German side that finished third at World Cup 2006.

Well known for his massive perm, Rudi Voller formed a strong striker partnership with teammate Jurgen Klinsmann. The German scored 47 goals in 90 caps for the DFB, winning the World Cup in 1990.

One of Germany’s most capped players of all time, it’s no surprise to see sharp-shooting Lukas Podolski in the third spot on this list with 49 goals. The striker played in three World Cups, winning the 2014 edition. He hit a screamer in his last game in German colors.

With 365 strikes for Bayern Munich, he’s still the Bundesliga’s top scorer to this day.