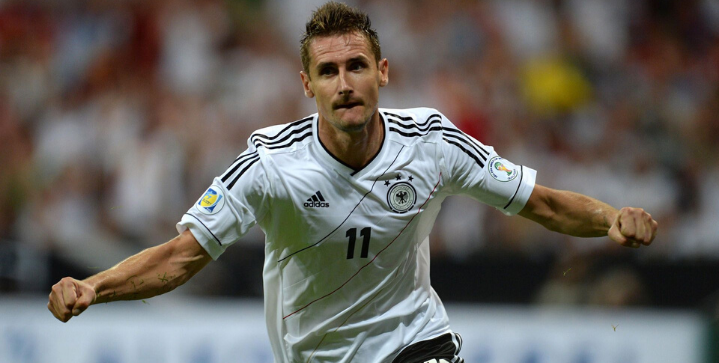 An incubator of some of the world’s best footballing talent, Germany has won a stunning four World Cups, three European Championships, and a Confederations Cup. From technicians to playmakers, let’s take a look at the most capped DFB players of all-time.

Lothar Matthäus spent two decades playing with the West German side, captaining the team that won the World Cup trophy in 1990. He won the Ballon D’Or that same year. The box to box midfielder played in five World Cups, only the second player to do so. While he filled his trophy case with virtually every club trophy at stints across Inter Milan and Bayern Munich, the UEFA Champions League was the only trophy to elude him.

The potent striker played an impressive 137 international games with the German side, scoring 71 goals. He is the all-time top scorer in World Cup history with 15 goals and played a critical role in the team’s World Cup victory in 2014. He’s also a 2-time German League Champion, German Cup Winner, and one-time Italian cup winner with Lazio.

With 130 caps and 49 international goals, Lukas Podolski is one of the most celebrated German players to date. A deadly finisher with a powerful left foot, the striker played in three World Cups including winning the one in 2014.

Bastian Schweinsteiger starred on the side that won the 2014 World Cup, during which he made his 100th team appearance. Known as the creative catalyst for the DFB, the energetic midfielder was also a Bayern Munich staple for 13 years before transferring to Manchester United.

A versatile fullback praised for his speed and pinpointed tackling Philipp Lahm has earned over 100 appearances for the German national team. The defender’s honors including captaining the side in the 2010 World Cup and the squad that won the 2014 World Cup in Brazil. He retired from international outings after the World Cup but went on to finish his remarkable 17-year career at Bayer Munich.

The first player to score in three consecutive World Cups, Jürgen Klinsmann also won his first World Cup in 1990 with the DFB, including a European Championship in 1996. With 82 caps and 40 goals, the lethal finisher went on to coach the German side that finished third in 2006.

A big man with great character, Per Mertesacker defended the German national side for a decade. The highlight of his 104 appearances culminated in his last game as the winner of the 2014 World Cup.

The footballer who ushered in the sweeper role for his dual dominance at both ends of the field earned 103 caps for West Germany over twelve years. He played in 3 World Cups, leading the team to its 1974 victory, while also winning the 1972 European Championship. He also coached the German side to a World Cup in 1990.

The versatile forward Thomas Müller is widely known for his diligence and creative passing and finishing skills. Despite coming up short in his side’s third-place World Cup finish in 2010, Müller himself won the Golden Boot for five goals and three assists. He’d win the Silver Boot in German’s 2014 World Cup victory. With 98 club appearances and 38 goals, the Bayern Munich stud sets the bar high on his future role with the national side.

The three-time German footballer of the year played in three European Championships and two World Cups. As captained of the side in 2014, Ballack netted vital goals in both the quarterfinal and semifinal games that helped the team reach the finals. He also played an instrumental role in pushing his side to the semifinals of both the 2006 World Cup and Euro 2008.