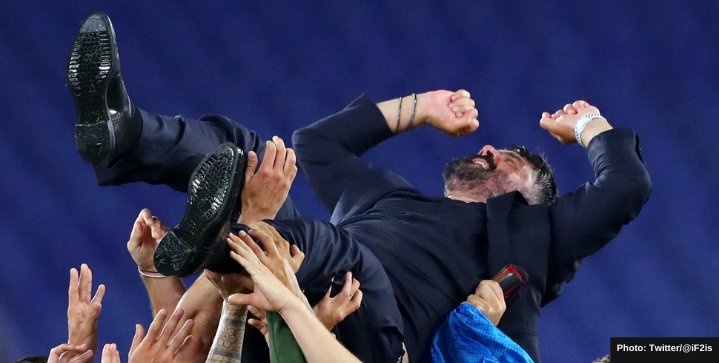 After talks broke down with Paulo Fonseca over finances, Tottenham have now turned their attention to Gennaro Gattuso.

The Italian now sits at the top of Spurs shortlist of potential managers due to Gattuso’s ties to new Tottenham managing director Fabio Paratici.

Tottenham’s search for a head coach goes on

Spurs have been getting the run around to fill their managerial vacancy. Daniel Levy fired Jose Mourinho before season-end and replaced the Portuguese boss with interim head Ryan Mason.

Since then, Spurs have been linked with top coaches including Julian Nagelsmann, Erik ten Hag, Antonio Conte, and previous Spurs boss Mauricio Pochettino. None of them accepted Daniel Levy’s proposals.

Gattuso’s coaching record comes with mixed reviews. While he led Napoli to the 2019/20 Coppa Italia, he’s been sacked in three of the seven clubs he’s managed since 2013.

It’s hard to think that Gattuso is the man to turn Spurs around. But if he gets the appointment and wins Tottenham a long sought-after trophy, all will be forgotten.