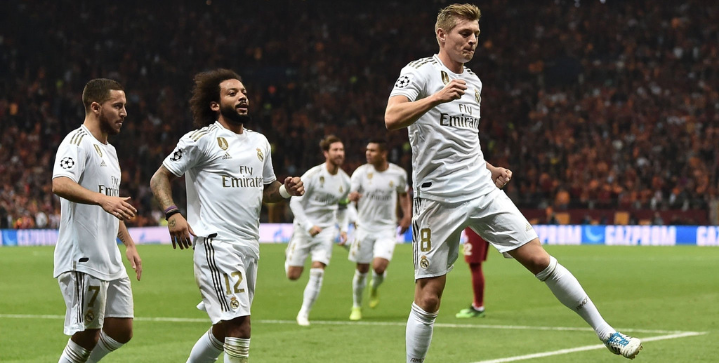 Take a breather Real Madrid fans. Los Blancos earned their first win of the Champions League campaign with a 1 nil win over Galatasary. They move into second place in Group A with four points, five points behind PSG.

Here are 5 things we took away from Zidane’s side in Matchday 3.

1. Real Madrid should have scored a lot more

While the net is still running dry for Real Madrid, they managed to get 27 shots off in Istanbul with 13 on goal. In fact, 15 shots in the first half made up 29% of Madrid’s total in the Champions League this season. But only one of those went in.

Toni Kroos gave Real Madrid its first lead of the Champions League season with off a deflected shot in the 17th minute. New signing Eden Hazard set up the goal with an exquisite backdrop pass (Hazard also should have had a goal of his own but shanked it off the cross-bar from close-range).

With the strike, Kroos also became the fifth player to score on his 100th Champoins League appearance along with Andrea Pirlo, Cristiano Ronaldo, Zlatan Ibrahimović, and Thierry Henry.

Belgian goalkeeper Thibaut Courtois made a series of stunning back to back saves to keep his side level early on in the game.

The first came in the 9th minute with Romanian striker Florin Andone trying to slot one home with Madrid’s defense napping. Courtois pushed it away. Andone was back again the following minute with a near knock it in the left corner of the net but Courtois used his 6’6′ frame to dive and send it wide.

Could we be seeing a return to the form Courtois displayed in the Premier League?

3. Sergio Ramos is still one of the best CBs in the world

While at times shaky, captain Sergio Ramos helped keep his defensive side keep a clean sheet like he’s done so many times before.

As he tweeted after the match, “We had to win.” One week after becoming Spain’s most capped player of all-time with 168 appearances, the Real Madrid legend earned another milestone. He overtook former teammates Roberto Carlos with the most appearances by a defender in the Champions League with 121.

4. Zidane feels the heat but hangs on

It seems like Zinedine Zidane is in the hot seat every other week with rumors circulating about his forced exit and Jose Mourinho’s rearrival. While the team won a narrow victory tonight in Istanbul and played some solid football, Zidane is likely to remain under the microscope.

Some fans have already lost patience. Others think Zidane could take on a different role within the organization, say Real Madrid’s director of football.

A more practical view might suggest that Real Madrid are second in La Liga and back running in Champions League — it is too early to make a judgment call on the man who won the team three UCL titles in a row.

Call it a lucky win, but Zidane came prepared to play his veterans against Galatasaray in a hostile atmosphere. With 15 shots on target, it was the team’s most in an away Champions League game since the 2003/04 season.

If it wasn’t for goalie’s Fernando Muslera’s heroics — he saved 8 shots inside the box — Madrid would’ve scored at least four times.

With Eden Hazard showing flashes of creativity, Toni Kroos’s mastery, and Ramos and Courtois stepping up on the biggest stage, tonight’s match in Istanbul could signal the turnaround Real Madrid need.