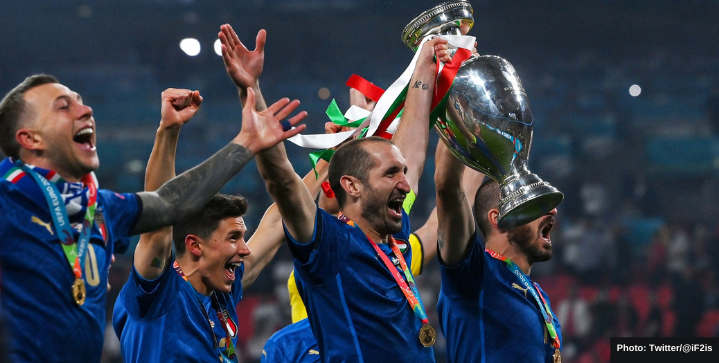 Take a breath, Juventus fans. Club legend Giorgio Chiellini is set to re-sign with the Old Lady for another season.

Chiellini is currently on vacation, getting some much-needed rest after helping guide the Azurri to the 2020 Euro trophy.

“I want to lift some more trophies, because it just makes you hungrier to do it again – and wearing the Juventus jersey without the Scudetto symbol on the chest represents an extra motivation,” said the 36-year-old center back who’s spent the last 17 seasons at Juve.

“I need a few more days to rest and recover from the chaos of the last month, but on Monday I’ll be in Turin and happy to get started again.”

Juve boss Massimiliano Allegri hopes to reward Chiellini for his commitment to the club by rewarding him with the captain’s armband upon his return. Paulo Dybala is set to be vice-captain, not Bonucci.

“The captains are decided on how long they’ve played for us. Bonucci left for a year, he made the choice, so if he wants the armband he must buy it and play with it in the street,” announced Allegri in his first press conference since returning to Turin.

Chiellini’s partnership with Bonucci at the international and club level is one of the best in world football. Italy’s “brick wall” will be looking to build on their national team efforts by returning the Scudetto to Juventus next season.