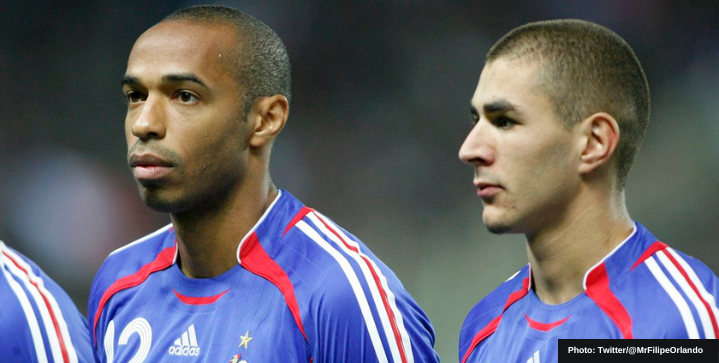 France has produced some of the world’s best goal scorers. So it’s no surprise that the leading goalscorers for the two-time World Cup Champions are a tight competition. Let’s run down the top 5 all-time Les Bleus scorers to date.

What else can be said about the Benz? While the Frenchman faced a temporary six-year ban from the national team after his suspected role in blackmailing a former teammate, the striker is still only 14 goals behind France’s all-time top scorer Thierry Henry. Benzema returned to the national team for the 2021 Euros.

Benzema has been in incredible Ballon D’Or worthy form in the past year at the club level, with a goal per game during the 2021/22 season, carrying his team to the Champions League title. So it’s no surprise to see his goal-scoring habits continue with Les Bleus, where he’ll be looking to add to his tally during the World Cup in Qatar.

With 42 strikes, Antoine Griezmann France is the third all-time top goal scorer for France. The forward won the Golden Boot from Euro 2016 and dazzled in France’s victorious 2018 World Cup.

He’s also a top performer when it comes to a cool haircut.

Many great players have represented France over the years, but only a handful have been able to etch their names into the history books.

Thierry Henry is one of those legends. The French striker leads Les Bleus on the all-time scoring list with 51 strikes. The World Cup and Euros winner is also the all-time leading scorer for Arsenal with 228 strikes. He helped Barcelona win the 2008/09 Champions League.

Olivier Giroud may not immediately come to mind when one thinks about France’s elite goalscorers. After all, Karim Benzema once ridiculed the striker by calling him a “Go-Kart” compared to his “Formula 1.” But the tall Frenchman, who’s always flown under the radar even at club level (he scored 105 goals at Arsenal), has shown time and time again that he is one of France’s most reliable goalscorers.

The underrated and underappreciated striker topped France legend Thierry Henry’s goal record of 51 strikes in a triumphant Round of 16 game against Poland in Qatar. “I feel like I am 20. That’s how I play when I am on the pitch, a young player wanting to compete,” said Giroud after scoring his record 52nd goal for France. But how many goals does he have left in him?

“At one point my body will say stop but for now, it’s accompanying me on the journey.”