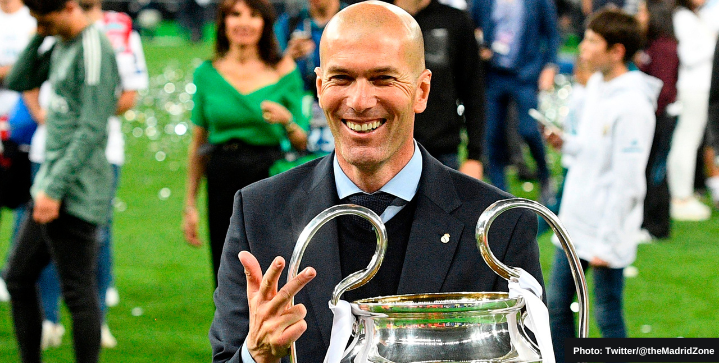 What makes a great player doesn’t necessarily make a great coach unless of course, your name is Johan Cruyff, Zinedine Zidane, or Pep Guardiola. Here’s our list of some of the best managers to-date who also happened to play professionally.

The Dutch influence on FC Barcelona goes back to the Total Football philosophy established by Dutchman Johan Cruyff both as a legendary Ajax and Blaugrana player and coach. As an Ajax player, he played 365 games and won eight Eredivisie championships and three European Cups. He also coached the team to two KNVB Cups and the Cup Winners’ Cup.

He made a total of 148 appearances at Barcelona, totaling 48 goals but more importantly influenced the modern game with his philosophy on the architecture and space on the field.

Not surprisingly, the mastermind of football is Barca’s winningest coach. From 1988 – 1996 he won the club’s first ever European Cup, 1 Cup Winners Cup, four consecutive league titles, and one Copa Del Rey and European Super Cup, along with 3 Spanish Super Cups.

Having played in two World Cups and with three Serie A clubs — Parma, Roma, and AC Milan — the ball playing midfielder Carlo Ancelloti collected plenty of silverware during his senior career. His honors include three Serie A titles, four Copa Italia, and two European Cups. His Midas touch continued into his managerial career.

In 2022, the legendary Italian became the first-ever coach to win five European domestic titles, garnering trophies in Serie A, La Liga, Bundesliga, Ligue 1, and the Premier League. During the 2021/22 season, he also became the first manager to win four Champions League titles, two with Real Madrid and two with AC Milan.

Pep Guardiola played an important role in Johan Cruyff’s Dream Team of the early 1990s as a defensive midfielder, winning the European Cup in 1991 and finishing his playing career with six La Liga titles. His creative vision and sharp passing abilities were a precursor to Xavi and Iniesta that followed in his footsteps.

As a coach, Pep Guardiola took Barcelona to another level. One year after winning the Tercera División as coach of Barcelona’s B team, “Pep” Guardiola became the coach of the senior side in 2008 and performed similar magic. In his first year with FC Barcelona, he led the Catalan giants to the treble of Champions League, Copa Del Rey, and La Liga. It was Barcelona’s first treble, as Guardiola became the youngest coach in history to win the Champions League trophy.

Surely one of greatest players of all-time, the midfield maestro Zinedine Zidane won a slew of trophies as a player, including a World Cup for France and a La Liga and Champions league with Real Madrid, two Spanish Cups, and two more Ballon d’Or awards 2000 and 2003. He also sparkled in his five years in Turin winning the Scudetto in his first two years with Juventus. He earned the Ballon d’Or in 1998 and was named the Serie A Footballer of the year twice.

Zidane’s greatness continued as coach of Real Madrid, where he collected three consecutive Champions League titles in a row (the first-ever) along with two La Liga titles. He won 11 trophies in less than six seasons at the Bernabeau, averaging a piece of silverware every 24 games.

One of the most successful Juventus players of all-time, Antonio Conte won five Serie A titles as a central midfielder for the Turin side, as well as a Coppa Italia, a UEFA Cup, and Champions League.

His collection of silverware continued as a coach, where he led Juventus to three Serie A titles and two Supercoppa Italiana titles. After a couple of years coaching the Italian national team, he guided Chelsea to the Premier League title in 2016/17 and an FA Cup trophy the year after.

Massimiliano Allegri spent his playing career as a midfielder for various professional Italian football clubs including Cagliari, Napoli, and Pescara but made a much bigger impact as boss. With successful stints at Sassuolo and Cagliari, he went on to coach at AC Milan for four years where he won the Serie A in 2010/11 along with a Supercoppa Italiana in the same year.

However, it was as coach of Juventus he made his biggest splash of silverware earning four Serie A titles, four Coppa Italia, one Supercoppa Italian, and runner-up in Champions League in the 2014/15 and 2016/17 seasons.

Jürgen Klopp also falls under the category of footballers who coached the team they played for. Klopp spent eleven years playing as both defender and striker for German club Mainz 05 before going on to coach the side for seven years where he led the team to its first promotion in Bundesliga and qualified for the UEFA Cup.

Klopp’s string of success continued at its highest level with Borussia Dortmund, leading the team to two Bundesliga titles, a German Cup, and a Champions League runner-up. In his seven seasons at Liverpool, he’s appeared in the Champions League finals three times — winning in 2018/19 — and won the Premier League.

As a defensive midfielder for clubs Atlético Madrid, Internazionale, and Lazio, Diego Simeone won La Liga, a Copa Del Rey, a UEFA Cup, a UEFA Super Cup, a Serie A, and a Copa Italia. He also earned 100 caps for Argentina, appearing in three World Cups and winning two Copa America.

Simeone’s coaching record is also impressive. He’s twice-won La Liga, along with a Copa del Rey, and a Europa League as manager of Atlético Madrid. He also earned second place in the Champions League for the 2013/14 and 2015/16 seasons.

With five La Liga and four domestic cups as a defensive midfielder with Real Madrid in the 70s and 80s plus a World Cup as head coach of Spain in 2010, Vicente del Bosque no doubt belongs on this list.

In addition to coaching one of the most talented national sides of all-time, he also won two Champions League and two La Liga.

Joachim Löw still holds the German club SC Freiburg scoring record, which he accomplished during his eight years at the club. But his honors as head coach of VfB Stuttgart and the German national team are way more impressive.

He won the DFB-Pokal and earned UEFA Cup Winners’ Cup runner-up, but he guided Germany to the 2010 World Cup, a third-place finish in 2010, and a FIFA Confederations Cup victory in 2017. He is the most successful manager in German history.

An intelligent and tactful defensive midfielder with Holland and Italy in the 80s and 90s, Frank Rijkaard won five Eredivisie titles, three KNVB Cups, a Champions League, two European Cups and two Serie A titles. He also played an indispensable role in the team that won the 1988 Euros, providing the backbone to the Dutch defense.

The Top 11 Craziest Goals of All-Time