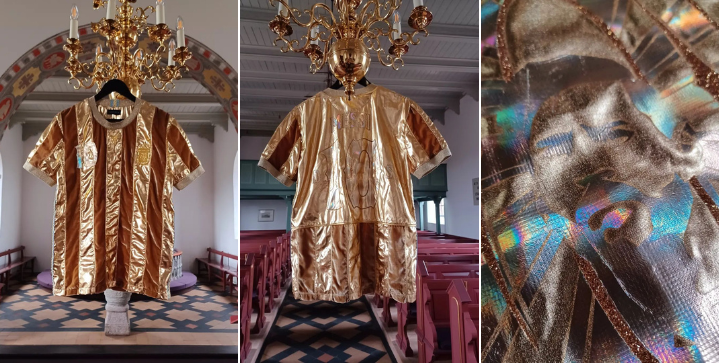 The special one-of-a-kind gold kit gets detailed with all-around gold. The unique use of velvet and holographic features underpin the striped shirt.

The classic sky blue of the Argentina kit gets delicately incorporated into the fabric, most prominently in the side stripes under the arms and back of the neck. But La Albiceleste colors also carefully gloss throughout the shirt, reflecting the king that Messi is.

Honoring Argentina’s golden one after a World Cup masterclass

The letters D and S shroud the iconic number 10 to spell out “D10S.” DIOS translates to GOD in Spanish.

But that’s not all.

The artist also created an exclusive hat accessory to pair with the special jersey. One half of the hat showcases the traditional La Albiceleste colors and crest. The other half adopts the jersey’s gold and velvet aesthetic. Top design, all around, made just for the GOAT.