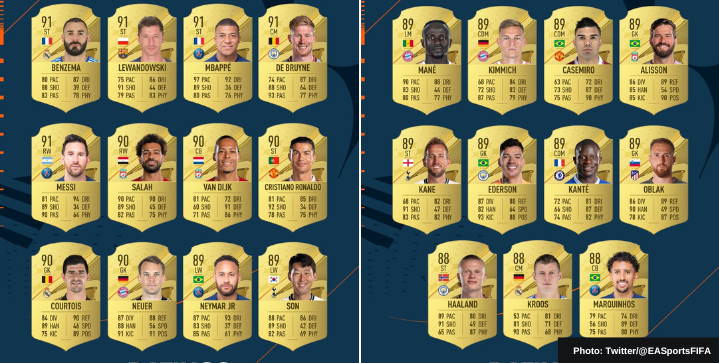 EA Sports has revealed the top 23 men’s players ahead of the game’s FIFA 23 launch on September 27.

As previously leaked, Kylian Mbappe is one of the highest-rated players in the game, with a 91 overall rating.

While Messi dropped two points from FIFA 22, he remains in the top five. Cristiano Ronaldo dipped to 90 from 91 the previous year with a -6 downgrade in pace (81).

Neymar also fell below 90 rated on FIFA for the first time since FIFA 2016.

But it’s 34-year-old Karim Benzema who jumped two points in rating after a stellar season where he scored 44 goals in 46 games. The Champions League winner improved his pace, shot accuracy, and passing.

With Messi and Ronaldo’s attributes waning, the future top-rated player in the game is up for grabs with all eyes on Erling Haaland. The 22-year-old Norwegian sensation cracked the top 23 list for the first time with his summer transfer to Manchester City.

He’s already scored ten goals in his first six Premier League appearances, the joint-fastest an EPL player has reached ten goals in the league’s history. Meanwhile, BVB starlet and EA ambassador Jude Bellingham received a massive upgrade with an 84 rating — could he break into the game’s top rankings next year?

See the complete list of FIFA 23’s top-ranked players below: