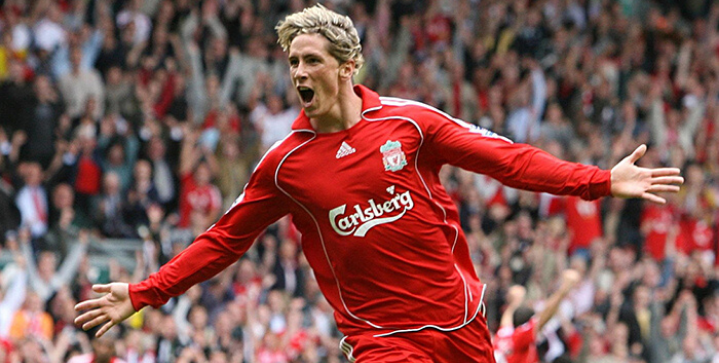 A deadly striker, Fernando Torres was a force to be reckoned with on the pitch. But El Nino also made sure his latest hairstyle packed a punch.

Here are the best haircuts the Spaniard wrote throughout his 19-year professional career.

Liverpool had the privilege to enjoy Fernando Torres at the peak of his powers, as he linked up with Steven Gerrard in becoming a scoring machine. But the hair was also perfect. Torres often wore a hairband to keep the wavy blonde hair out of his scoring chances.

He netted 81 goals in 142 appearances for the Reds.

Torres continued to wear different lengths of the wavy blonde hair throughout his career. Here’s his blonde layered hair-do with bands, surrounded by fellow nominees (Xavi, Ronaldo, Messi, and Kaka) for the FIFA world footballer of the year in 2008.

Fernando Torres went back to his traditional hair color of dark brown for the 2010 World Cup which Spain won. Some say the shift away from his long hair toward a shorter look signaled the end of his magical scoring powers.

El Nino signed his first professional contract with Atletico Madrid at 15-years-old. Here is boy wonder with an early sign of curtains.

A footballer of many exploratory hairstyles, the Spaniard wore a blonde-infused higher taper fade cut with blonde streaks in an attempt to reverse the hair curse in his second stint at Atletico. Of course, things could get a little crazy during gameplay.

Torres continued his natural dark brown look in the second half of the 2015/16 season during his second stint at Atletico Madrid, enjoying the mid-length comb over with short-cut sides.

Opting for simplicity, Torres displayed one of the more conservative haircuts one can get during World Cup 2014: the buzz cut.

A career of ebbs and flows. Torres went back to his medium blonde hair as he had in his hay day of Liverpool upon his loan to Atletico Madrid during the 2015-16 season.

Torres caught the Faux Hawk bug in the 2000s, going with shaved sides with a gelled blonde faux on top. Ask your barber to get the look.

Torres donned a superb golden mullet during his first years with Atletico Madrid and the Spanish national team.

Torres adopted the blonde highlights and spikes for one of his shorter haircuts in his earlier years.