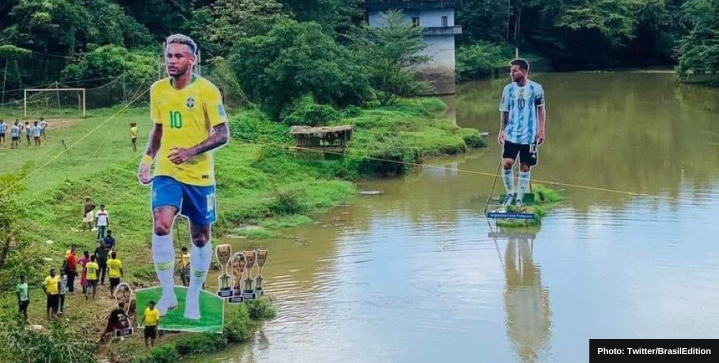 An Indian village has welcomed the World Cup with giant cutouts of the world’s best footballers.

That’s right — Neymar, Messi, and Ronaldo have all received large cutouts in Kerala, India, and are floating down the local Pullavoor river to celebrate the World Cup, which is just 13 days away.

The cutout craze started when a group of hardcore Messi fans created a 30-foot-tall cutout of the Argentine legend last week. Brazil fans followed with a larger-than-life 40-foot cutout of Neymar (here’s another one).

Not to be outdone, Ronaldo fans have created a 50-foot installation of the Portuguese superstar — a still of him preparing for a freekick at the 2018 World Cup. There’s also one of Ronaldo in a white Portugal kit.

The cutouts are part of Kerala’s craze for the World Cup, the second most celebrated festival after Onam, an annual Indian harvest festival.

World Cup fan and artist Ajay V John also created a mural of Messi made from thousands of post-it notes and laid it out on a basketball court.

Let’s hope all the art stays up until the end of the World Cup.