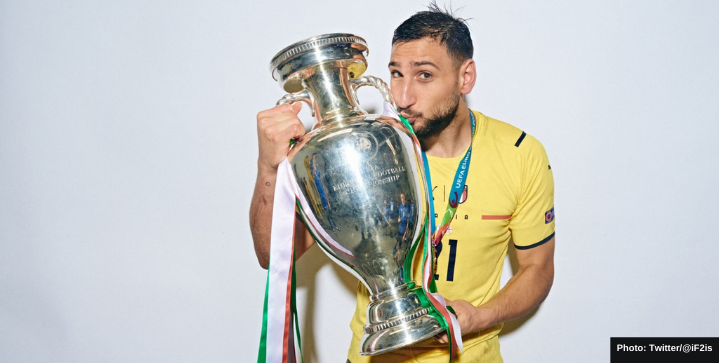 “Donnarumma is the best goalkeeper in the world,” said Roberto Mancini after his team’s victory at the Euros. Mancini clearly has a point.

The 22-year-old goalkeeper Gianluigi Donnarumma enjoyed the tournament of his life, conceding just four times in 719 minutes. He also won two penalty shootouts, saving three penalties in a row last night to make his team European Champions — even if he didn’t know it.

“I didn’t celebrate on the penalty because I didn’t realize we won,” said Donnarumma, which explains his stone-cold expression after the save.

The Heir to Gianluigi Buffon

Donnarumma dominated the shoot-out against England thanks to remaining tall in goal (he’s 6’5) while keeping enough composure and patience to dive in the right direction, at the right moment.

His tactics left Rashford second-guessing himself and hitting the post.

The average save rate for penalties is between 15-20%; Donnarumma averaged 34% during the tournament.

Remarked Italy center back Leonardo Bonucci in a post-game interview: “I was lucky because I played with Gianluigi Buffon, now I play with Gigi Donnarumma – it is the same!”

“I want to thank [Leonardo] Bonucci and Chiellini,” said Donnarumma after winning the Player of the Tournament award. “It’s thanks to them that I won.”

But Donnarumma still has a long way to go to be considered one of Italy’s best goalkeepers of all time. “No, he is the strongest of all, the number one,” Donnarumma said of World Cup winner Buffon. “He remains the greatest of all.”

Buffon, meanwhile, remains optimistic about his fellow countryman following in his footsteps. “He can have an extraordinary career,” said Buffon. “The fact that he made his AC Milan debut at 16 and dealt with that pressure is a huge positive sign.”

What’s next for Donnarumma

Italy’s hero is also a free agent. According to French outlet Le Equipe, Donnarumma will be departing his first professional club AC Milan this summer for PSG.

At €8M/year with add-ons, let’s just say Donnarumma could be the bargain of the year.