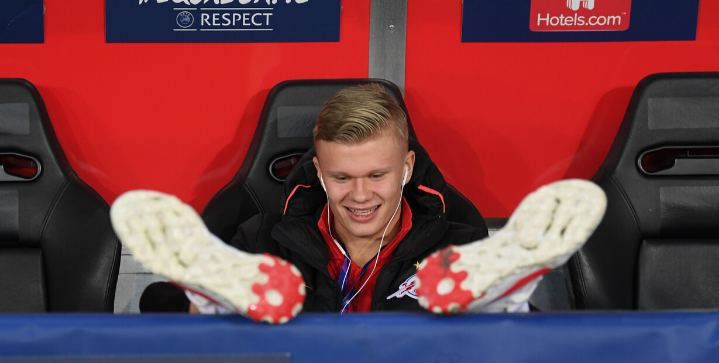 Manchester United are still favorites to sign teenage sensation Erling Haaland despite his visits to both Dortmund and RB Leipzig on Wednesday.

Salzburg’s sister club RB Leipzig — both owned by Red Bull energy drink — see Haaland’s as a replacement for German striker Timo Werner who could leave in January for Chelsea.

The 6 foot 4 Haaland has also been on the transfer wishlist of many of the world’s top club’s this January window, including links to Real Madrid, Barcelona, Bayern Munich, and Juventus.

But it looks increasingly that Manchester United will be the 19-year-old’s next destination, given his ties to the Red Devils boss Ole Gunnar Solskjaer. Solksjaer recruited Håland for Molde for a mere £180,000 back in 2017.

Could Haaland reunite with his old boss in Old Trafford this January?

Despite scoring in all five of his first-ever Champions League matches, Haaland came up short in the team’s two-nil loss against the Reds. The 19-year-old was substituted in the second half.

Haaland would add even more firepower to a frightening Red Devils attack that includes young talent Marcus Rashford, Anthony Martial, and 18-year-old Mason Greenwood who tonight became the youngest ever player to score a brace for the team in a major European tournament.

Should Haaland move on, he would join Takumi Miniamino as the other starter to leave the Austrian side to join the Premier League in the January window.