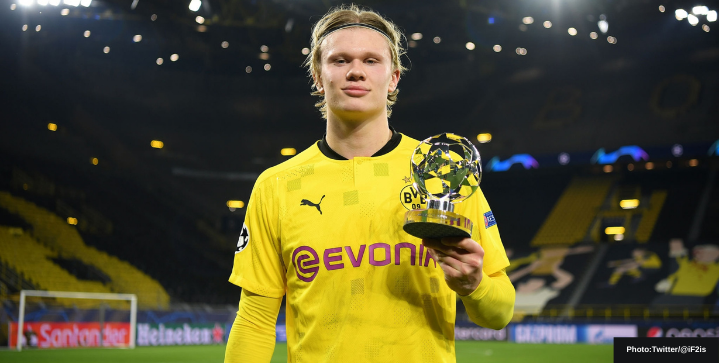 He came, he saw, he conquered.

Erling Haaland is the crown prince of world football. He scored 12 goals in 8 Champions League matches for Borussia Dortmund this past season.

In doing so, he became the youngest player to reach 20 Champions League goals. He also became the first player to net 20 goals in the tournament with the fewest appearances.

The goal machine has done all this before his 21st birthday.

While we wait and see which club Haaland plays for next season — he’s linked with Manchester City and Chelsea — let’s take a look at the player’s best Champions League strikes for BVB to date.

Erling Haaland scored a pair of braces in each leg of the Round of 16 against Sevilla.

But this away goal put BVB comfortably ahead in the tie to make it 3-1.

Marcos Reus nicks the ball off a Sevilla defender to take it down the pitch and set up Haaland for the knock-in. The Norwegian slots it in with controlled power and good placement.

It wasn’t a victory for BVB but it was yet another goal for Haaland.

American midfielder Giovanni Reyna takes the lead pass from Haaland, only to return the favor in the box to the forward-running Haaland. You know how this ends —the 6-foot-4 wonderkid rips it into the back of the net.

Haaland receives the ball just past the half-way line and uses his to pace to dribble like a serial killer toward goal. But even sweeter, he finds Jadon Sancho for the quick one-two. Tasty pass, tasty finish.

Haaland scored his 16th goal of the season against Club Brugge with a nifty kiss off the post from a tight angle.

The deliverer — again, Jadon Sancho. Haaland is going to miss his teammate.

It was only a little more than a year ago when 19-year-old Haaland signed for BVB in a $24 million transfer from RB Leipzig.

It’s fair to say he’s delivered, providing 49 goals and 6 assists across all competitions to this day.

But perhaps no strike is more vicious than his thunderous blast against PSG in the 1st leg of the Round of 16. Indeed, the strike nearly takes the net off.

PSG ultimately won the leg and mocked the Norwegian’s meditative celebration in the team’s locker room.

Fair to say we can expect to see more Haaland golazos tonight? Count on it.