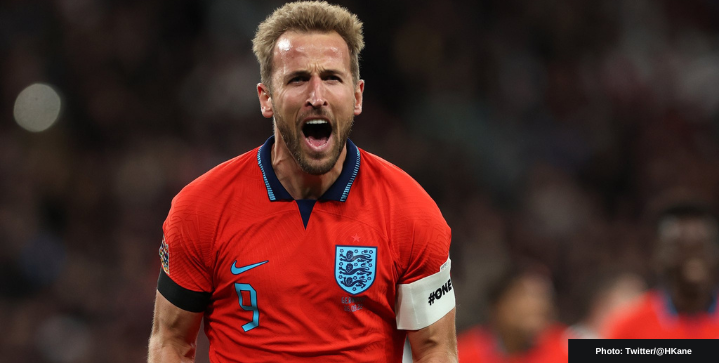 England, where football was born, is naturally where some of the world’s most prolific footballers originate. You might recognize a few more recent names: Alan Shearer, David Beckham, Wayne Rooney, and Harry Kane. But those aren’t the only ones who make up England’s all-time top scoring list.

Chelsea legend Frank Lampard rounds out England’s all-time scoring list at the 10th spot. The midfielder never quite carried over the magic he displayed at the club level but his presence on the list still speaks to his versatility.

A famous one-club man, Finney played for Preston North End for his entire career, scoring 187 times in 433 appearances. He also starred for England’s national team for over 12 years, firing away 30 goals in 76 appearances.

Bolton hero Nat Lofthouse was the Wanderers’ all-time top goalscorer with 285 goals. He’s also England’s second top goal scorer per cap at .91 per game — that’s 30 goals in 33 matches. He was nicknamed the “Lion of Vienna” for coming back into the game after getting knocked out whilst scoring the winning goal against Austria.

As the Premier League’s all-time top scorer with 260 goals, Alan Shearer undoubtedly makes an appearance on this list. The striker also left his stamp on the national team, notching 30 goals in 63 matches from 1992 – 2000. He won the Golden Boot at Euro 1996.

Michael Owen made his first start for England as an 18-year-old, scoring one of the team’s greatest ever goals with a solo effort against Argentina at the 1998 World Cup. The striker enjoyed a stellar career for England with 89 caps before being nagged by repeated injuries.

Spurs legend Jimmy Greaves was also a superb striker for the England national team. He scored a whopping 44 goals in just 57 appearances for the Three Lions (.77 goals per cap) before suffering an injury blow just before England’s 1966 World Cup glory.

Gary Lineker is one of England’s all-time top scorers, with 44 goals in just 57 appearances for the Three Lions. The former Barcelona and Tottenham striker was a prolific goalscorer for both club and country and is widely regarded as one of the best strikers of his generation.

Lineker also has the distinction of being the first English player to win the Golden Boot at a World Cup, scoring six goals in Mexico in 1986.

The man, the myth, the legend. Bobby Charlton scored twice in the semi-finals of England’s first-ever World Cup triumph in 1966. The forward/midfielder notched 49 goals in 106 matches for the Three Lions, including a legendary run at Manchester United, where he appeared 758 times.

What else can we say about Harry Kane, the current England squad captain? The formerly dubbed one-season wonder for Spurs has become one of the most prolific scorers in today’s game at both club and international levels. He’s scored 53 times in 80 appearances, tying Wayne Rooney’s all-time goal-scoring record for England.

One of England’s most complete forwards, Wayne Rooney is the nation’s top all-time goal scorer with 53 goals and most capped with 119 appearances. The prolific number 10 remains Manchester United’s all-time leading scorer with 253 strikes.

What’s next in the Neymar and Mbappe feud?